In the great outdoors...a stormy Monday after a week of glorious weather. The forecasted temperatures are still very mild for the foreseeable future. YAY! But, this is the South. Spring means severe weather. Fortunately, this bout is “just” severe t-storms with hail and high wind. Tornadic threat is low. Just praying that that the hail stays away from those baby crops in east Arkansas.

Within our four walls...a little sluggish after a week of later-that-usual nights. But, still processing through the morning well.

A heart of thanksgiving...for the connection that comes through prayer, no matter how many miles separate friends.

A heart of prayer...for a church family facing very tough health decisions, for other friends also dealing with health frustrations, for several precious souls in need of salvation, for friends far and near, for no hail on the farmers, and for the Choates as they settle back into the village after a long absence – and that their antiquated UUPlus (e-mail via radio) system will function!

Random observations...I started this post last week. And kept trying to get it ready to publish. Obviously, it never happened.

Thoughts from the kitchen...We found a new menu plan site with some new-to-us recipes. It’s a subscription based program, so we debated getting into it. But, we went ahead and paid for the subscription for a few months just to try to shake up our cooking doldrums a bit.

So far, we’ve noticed that the menu plan uses FAR less meat/protein than we’re used to. Veggie meals (with almost no protein) or broth soups with very little substance beyond the broth (mushrooms & bamboo shoots, for instance) are common.

In other news, my oven doesn’t like to bake bread. It’s so hard to get it done on the inside! We’re hoping to find that sweet temp spot to actually get it done without burning it. Meanwhile, we’ll be sticking a thermometer in it to make sure its done before turning the oven off, no matter what the clock or crust says.

On my bookshelf...more delayed reading. Another week or two, and I’ll be back to it.

Projects...finishing up the writing project; organization for my work space; brainstorming sunroom rearrangement. It’s another room still stuck in the “get moved in” state of being. It’s a cluttered mess, and I’m so ready for it to be more functional as an office for all of us!

Sounds of the moment...thunder rumbling and rain pounding. A thunderstorm can be rather loud out here in the sunroom. But, it’s not too bad right now because the wind is pretty calm.

And now it’s getting louder…and louder. Wow! Time to unplug the laptop to avoid electrocution.

From Hibbard Academy...six more weeks. Yes, we’ve figured it up, and we have six more weeks of work. There will be some time off to stretch that to more like eight calendar weeks, but the breaks will help. Yay!

A favorite thing from last week...our Saturday on Petit Jean. Doug had a cooking class (Christmas gift) at the location where we typically go for Table for Two, so the kids and I rode up with him and roamed the state park. Yes, it meant writing did not get done. Or school prep. Or house cleaning. Or clean-up in the sunroom. But sometimes other things are needed more. And that was SO needed. It was a glorious day for all five of us, even if we were separated for a portion of it.

The planner...Doug has a couple of evening meetings this week, but otherwise the week is mostly at-home. Which means focus on school, work, and writing.

Because visuals are fun...what happens when the girls receive a new issue of Dear Magazine. 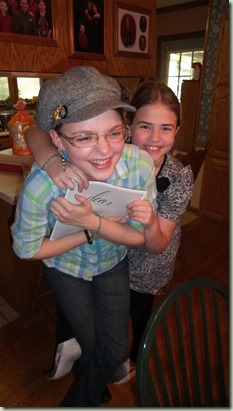 Herding Grasshoppers said…
Sounds like happy times at your house! Hoping your thunder storm stays a thunder storm and nothing more ominous!

Your new menu site sounds interesting, but too low on the meat for a house with growing teens! Of course, you can always do what we do... we have a great recipe for "vegetarian chili" that's SO MUCH better with meat added to it!

Hi to all your family :D

The Hibbard Family said…
Julie, that's EXACTLY what we've been doing! Adding meat and all sorts of other fillers. Just a necessity around here! ;)
April 11, 2016 at 1:26 PM

Mary Ann said…
Gary is driving & ive enjoyed reading your blog aloud to him. Your creative writing just gives us the visual we need to see the household play out. How you get all your reading & writing down on top of everything else is amazing to me. Would love to work a visit in sometime in the spring!! Love to all!
April 11, 2016 at 7:27 PM