In the great outdoors...hot and humid, although if the forecast holds us, we’ll get a bit of a break this week!

Within our four walls...getting going on the morning.

A heart of thanksgiving...for Doug’s safety in travel so far. He left yesterday morning for a two-week mission trip to Peru, and flight #4 out of 5 landed in Lima around 8:20 this morning. He has about a five-hour layover before one last short flight takes him to his final destination.

A heart of prayer...for Doug and the rest of the mission trip team as they dive in after two days of flying. Doug arrived in Bogota around midnight and left for Lima around 5:00 this morning. No sleep in the airport and only about a two hour nap on the Bogota to Lima flight. He’s tired!

Random observations...texts are not the same as voice. Don’t get me wrong - I’m so thankful for text communication with my hubby for the next two weeks. And I love that he’s sending me little videos via text when he can. But, I look forward to that real phone call I’ll get when he gets back of US soil next Saturday!

My silly children...made up an improv game yesterday involving Lego characters representing Matt Smith (Doctor Who) in dreadlocks, Stormtroopers, and the cast of the TV show The Librarians, complete with season two’s rendition of Moriarty and Prospero. It was more than a little frightening, but it had them laughing so very hard! I love it when my kids laugh together like that!

Thoughts from the kitchen...using up leftovers and menu planning based on what’s in the freezer. This month has been so strange, and we’ve hardly followed the menu plan at all! So, I’m hoping to be able to use up what we have and end up with a very light grocery run this month.

On my bookshelf...I picked a Julie Klassen book off the shelf the other day. I just needed something to unwind my brain, but didn’t want to reread a book – even a favorite book! My reading time is so limited that I want to use it to plow through everything I haven’t read, even when my brain needs a break.

Projects...finishing school planning. Originally, I was really hoping to not be pushing to the last week, but as busy as our summer has been, I’m now just thrilled to know that I really will have it done!

Sounds of the moment...birds in the distance, the fan, tapping of keys.

From Hibbard Academy...today I will be working on Angela’s literature/language arts, art for Steven and Angela, and PE for everyone. That’s all I have left! Yay!

A favorite thing from last week...both going to PraiseWorks with Olivia, Angela, and Bekah from church AND coming home – or rather, seeing my sweet hubby first thing Friday morning when he arrived for the finale, then seeing Steven a little while later. PraiseWorks was awesome, as usual, but I love having the family back together, even for just a couple of days.

The planner...school planning, work, church, then a trip to Almyra this weekend.

Because visuals are fun...my girls were “fighting” to see who could get – and keep – this little sweetheart Sunday morning. My girls have pretty much adopted her and her big sister (Steven and their brother are about the same  age), and they all missed two weeks of hugs, thanks to overlapping trips! I think they went through withdrawals. 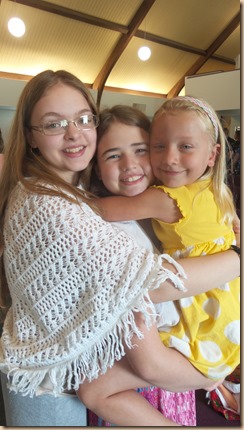 Hang in there while Doug is gone! Isn't technology great? Kerry was in Chile when the boys were little (back before we had a cel phone)... Some things are harder and some things are easier when Dad is away!

Hurray for your planning,