Not only is that crazy because of the flying of time, but it’s also crazy because for the first half of the day, the window by my desk was open and I enjoyed the beautiful, cool air wafting in. It hasn’t been that way for most of July. We’ve had nasty heat and humidity. So, I soaked it up!

It’s a “normal” week. Don’t laugh. I know there’s nothing normal about the Hibbards. But, think of normal as what would exist if our family had two weeks in a row that looked alike. Routine. That’s what we get this week. And it’s a coveted reality. The internal workings of that routine are a bit odd because our to-do lists are full of tasks related to catching up from a summer of insanity. But, I’m delighted with the return of routine!

It takes much longer to relearn how to rest and relax than it does to unlearn such skills. That’s why it’s so critical for it to be a regular thing. We plan to be proactive about relearning this week.

“Ears to hear doesn’t mean, always, a mind to grasp. It means you listen. You lean in. You wait, you pester, you dig.” – Mark Buchanan, Spiritual Rhythm

Too often, I assume that if I don’t grasp, that means I’m not being obedient to have “ears to hear.” I feel so dense sometimes. This was encouraging.

A myriad of blog posts that I hope I will be able to hash out well this week. I’m choosing to make the time, even if that means I have to start school with a little less done than I’d hoped.

Having hubby back home again after two weeks in Peru. This week and its gift of a chance to breathe! The opportunity to see various interests and passions develop in my children. The way God stretches me, even though it’s not usually fun.

This morning, I asked Angela a general-interest history question, curious if she knew about the topic. She said, “Not really.” Next thing I knew, I saw her pouring over encyclopedias to make sure she could change that “not really” into a yes! 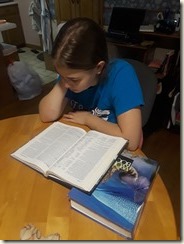 Steven, meanwhile, really hates to be bragged on or even noticed when he does sweet things. So, this morning when he was in my room, I asked him what he was doing. “Oh, nothing much.” I noticed he was messing with the pile of clothes on our bed, so I asked him if he was folding Daddy’s laundry from Peru. He just said, “Why would I do something like that?” A little while later I found this: 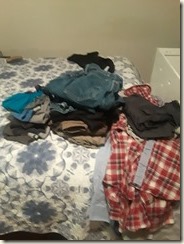 We got in late last night, but Olivia jumped in to take care of necessary dishes while I fixed a late supper. This morning she’s working through some PSAT prep and room cleaning – except for right now, as she’s taking a break to enjoy the beautiful morning with a bike ride. On her way out, she was stopped by this fuzzball: 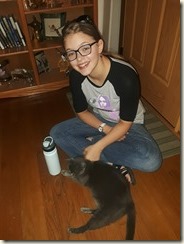 School prep – cramming it all in at the last minute, which is so very much NOT my preference. Last week I didn’t enjoy it as much as I normally do (this is usually my favorite time of the school year!). But, this week I’m feeling the excitement return. I think the progress I managed to make last week is helping me feel less overwhelmed and more enthusiastic about the new school year. There is still a lot to do, including getting old stuff put away and new stuff labeled and put out, but the kids will probably help me with that later this week after I finish most of the layout of the year.

Even though school is just a bunch of book piles right now, we’re taking care of a few things, including working through Well Planned Start with Angie and Steven – starting with Angie today. I’m always proud of what we create through my job (wellplannedgal.com), but I have never been as excited about a product as I’ve been about this one. It blows me away!!! 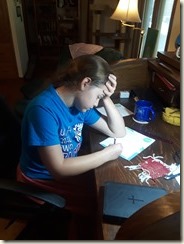 Having my hubby back home. Although he’s at work this morning. But still!

Summer routine this week – or what would have been summer routine had we had the chance! Ha! Hopefully school routine starts next week until Thursday when we take off for Steven’s birthday.