In the great outdoors...we started the morning with snow on the roofs as well as in a few spots on the ground, especially right around the trees. It melted quickly, but it never did get very warm out there. Our trees are finally starting to bud, though!

Within our four walls...kids are in bed. Doug is finishing up something. I’m contemplating how the rest of the week will play out. Need to get a good bit done on a major writing project at some point!

A heart of thanksgiving...for laughter. God created an incredible blessing when He created laughter.

A heart of prayer...for my co-workers, the Choates, and other precious loved ones struggling with issues right now.

Random observations...be careful what you are doing when watching Tim Hawkins. Especially when watching something you’ve never seen before. Eating, for instance, can be dangerous. You might end up choking on your carrot cake. Fair warning.

My silly children...will probably hear this song on numerous occasions in the future.

Thoughts from the kitchen...some GREAT new recipes! How exciting! Sadly, two of them are soup recipes that won’t be coming back out much until the fall. Unless, of course, spring sticks around for awhile (if it ever actually arrives!). Maybe it won’t be too warm of a spring. (I’m not the kind of person who can eat soup when it’s warm, unless I’m sick.)

Anyway…on Tuesday Olivia helped me make spicy orange chicken (Chinese recipe). It wasn’t very spicy, but it was a BIG hit! Then on Wednesday, we had a spicy cheese soup. Almost like a taco in soup form (but not taco soup). Steven was the least impressed because he wasn’t too sure about the beans, but even he seemed to be okay with it. The rest of us were very pleased. Finally, Sunday was an experiment we’ve been intending to make for a while. Doug loves Olive Garden’s pasta e fagioli soup. We found a recipe that was supposedly a copy-cat version. It wasn’t. It was BETTER! Yum!

On my bookshelf...well, I started Draw of Kings. Then I was reminded that I had completely missed putting a review book on my calendar. Fortunately, it was a quick read. Now I just have to get the review written up – hopefully tomorrow. Next up is some historical fiction entitled The Thief, set in Jerusalem around the time of Jesus’ crucifixion. I’m definitely intrigued.

Projects...the aforementioned writing project. Meanwhile, I’m working on crocheting a stuffed cow for Angela for her birthday. I have no pattern (I couldn’t find one I liked), so I’m winging it. This could be interesting, which is why I’m starting so early! Same thing with Steven’s puppy, but it will be knit. Still hoping to find a pattern I like for both of them! I still haven’t decided on the fabric for Olivia’s bag, so that’s on hold. Fortunately, that will be a quick project.

Sounds of the moment...the norm for an evening: tappity, tap, tap, tap with some music in the background.

From Hibbard Academy...a nice backlog of grading. Again. I keep saying I’ll stay caught up. And I did manage to accomplish that for one week! Unfortunately, it wasn’t last week.

A favorite thing from last week...watching the kids get Grandma & PopPop snuggles.

The planner...lunch with the Gleaners tomorrow, dinner with friends tomorrow night, church Wednesday, writing like the wind Thursday night while Doug goes to a banquet, and then the weekend. No telling what the weekend will bring!

Because visuals are fun...the past few days have made us wonder if we misnamed our son. I never thought to name him Linus. 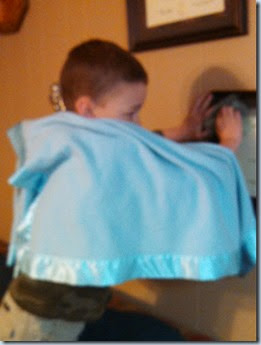 Herding Grasshoppers said…
Oh, that's a very Linus-like blanket! I'm intrigued by all your soups, especially the Olive Garden knock-off. Can you share it?!