In the great outdoors...a cold front is rolling in. For now, it’s still pretty warm and muggy, but that’s not supposed to last. I’m excited!

Within our four walls...a bit of goofiness, which makes me wonder if morning chores will ever get done.

A heart of thanksgiving...for our incredible veterans, including my grandfather and father-in-law, as well as so many friends.

A heart of prayer...for friends who are dealing with family issues right now, issues of many sorts – relational, health, financial, decision-making, disappointments, work issues and on and on. It’s all around us.

Random observations...so, I started this post first thing this morning. I just skipped this particular starter. Now it is after 9:00PM and I’m just getting back to it. One of those days. But a productive day, thankfully!

My silly children...are goofy. Wait, I mentioned that, didn’t I? Well, I’m not sure that there are words to convey the reality of the situation. It’s like they sense the coming weather and are behaving as if they’ve already been cooped up for weeks in anticipation of being cooped up for a few days.

Thoughts from the kitchen...pulling something from the freezer today. I love it when we cook enough to put an entire meal into the freezer for later!

On my bookshelf...Christmas books! I’m so excited! I intend to actually read them at the appropriate time this year. Let’s see, I have Where Treetops Glisten by Tricia Goyer, Cara Putnam, and Sarah Sundin. I also have The Women of Christmas, a Christmas devotional by Liz Curtis Higgs. But the one I’m most excited about is not on my bookshelf – it’s on my Kindle. It’s entitled A Journey to the Manger: The Places of Advent, and it’s written by none other than the wonderful Doug Hibbard! Clicking on the image below will take you directly to Amazon. (A print version is in the works, but it might not be available by the beginning of Advent. But, even if you don’t have a Kindle, you can download the free Kindle reading app for computer, tablet, or smartphone and get started!) 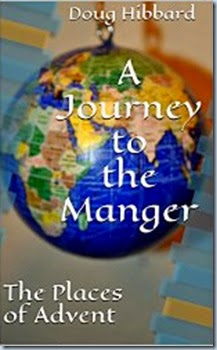 Projects...I’ve decided to do a lot less homemade this year because we already have a pretty nice stash of gifts we’ve put away for the kids. But I still want to make a few things! I’m ready to have a day to just sew and create.

Sounds of the moment...rumbling across the street is drowning out everything else. It looks like they might finally be working on the road that was torn up by construction equipment when the store was going up. The noise is worth it if that’s what they’re doing! Not long ago, they actually worked out the little gravel road that leads to our driveway. It had gotten so bad that it was hard to get in and out after a rain. They dumped four loads of gravel on it before working hard to pack and smooth it. It’s wonderful now! So thankful!

From Hibbard Academy...Angela is learning how to write a research paper while Olivia is finishing up a book in preparation for her next responsive writing assignment and Steven is learning about plurals. The younger two are in a review phase in math, and Olivia is learning about conversions. Angela is studying Korea and Japan and more about the human body. Steven’s enjoying lessons on light while diving into early American exploration, about to get to the first English colonies. This will be the first time our lessons on the Mayflower will coincide with Thanksgiving – that’s kind of neat! Olivia is so independent that it’s hard sometimes to keep up with where she is in history and science. I know she’s finishing up a science module that deals with the history of science. She’s enjoyed it so much that she sent a little note to Dr. Wile (author of the textbook) to let him know. I love that he’s so interactive with “his” students. In history she is somewhere in the late 1600’s/early 1700’s.

A favorite thing from last week...finishing up a major project more quickly than expected. We had a pretty big yard project going on, and I kind of expected it would take at least one more Saturday. Nope! We finished it! Yay!

The planner...fundraising banquet tomorrow for our mobile crisis pregnancy center. That’s about it! I like the looks of that, especially after a couple of very busy weeks.

Because visuals are fun...they all wanted to read the same book for book time. Fortunately, Olivia has a big bed! 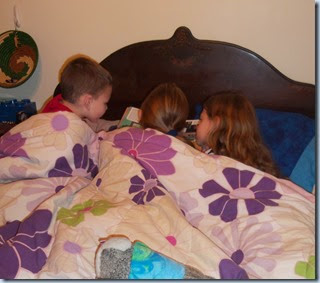 Herding Grasshoppers said…
Ann, I'm so glad you had the time to jump back into blogging - I've missed you :D

I don't have a Kindle, but I'd love to get a paper copy of Doug's Advent Devotions.