In the great outdoors...fog. We have been three weeks without sunshine. Now I can just begin to understand my friends who live in areas where the sun shines so little. Over the past three months, we’ve had very little sunshine, and we’re about to go crazy. And that’s just been three months!

Within our four walls...calm, amazingly. This morning Steven and Olivia were pinging, so I’m actually quite surprised by their calmness. I think they’re being respectful of the fact that Angie is recovering from being sick and I have had a bit of a headache this morning. Sweet kids.

A heart of thanksgiving...for the rain and snow we’ve had lately. Despite the clouds, it was turning out to be a rather dry winter, which wasn’t boding well for the farmers. We’re getting the moisture now!

A heart of prayer...for sunshine; that the wetness does dry up sufficiently for farmers to get into their fields in a timely fashion; for the next winter storm, scheduled to come in tomorrow, to not be bad. (I’ll be honest, that’s a pretty selfish prayer, as Doug and I are supposed to get away this weekend, as are our friends Eric & Jennifer – separate trips, just similar timing. Anyway, at first we were just supposed to get snow, which wouldn’t have been a big deal. Now they’re saying mostly ice. Lots of it. That’s a problem.)

Random observations...I love my job. Yes, that’s super random, but I just saw an e-mail pop up with some most recent hashing out/brainstorming. I work with some of the most creative, most incredible people, and I love being a “team” with them. We all throw our separate talents into the pot, blend them together, honor the insight of others, and come up with things we could never come up with on our own. And everyone there knows it. Everyone knows this is no one-man show. And everyone hungers to honor God in the process. Wow. I just love seeing what God does every single day with HEDUA!

My silly children...are getting louder. And sillier sounding. Much laughter. Should I be scared?

Thoughts from the kitchen...lots of chicken noodle soup has been consumed around our house lately, partially because of the cold and partially because Angie hasn’t felt well and it’s great comfort food. I think today we’ll be back to a soup with more of a kick.

On my bookshelf...actually, I’m more excited about what’s coming soon than what’s there now. Tricia Goyer’s Teen Mom releases today, and the next book in Brock Eastman’s Quest for Truth series comes out in a few months (my kids are SOOOO excited!), as does Patrick Carr’s free e-book preceding his newest series. Ahh…such excitement! I love books!

Projects...I needed a new “keep my hands busy” knitting project. I love to knit while Doug’s reading aloud to us, while we watch movies as a family (things I’ve seen before that don’t require my full attention), or while Steven is writing out his dictation work or doing math drills. Just a few minutes here or there, but it’s so fun to watch a project begin to take shape while I’m also enjoying my family. Right now I’m learning to knit socks. I found a fun pattern for a nice, chunky, warm pair of socks – and it’s a pattern specifically designed as a tutorial for first-time sock knitters. Perfect!

Sounds of the moment...the kids playing. Yes, it’s getting louder. I’m about to go find out what they’re up to.

From Hibbard Academy...planning week. I’m a planner. It’s nice to have the Sonlight instructor’s guides all laid out for me and to have other curricula that are easy to dive into. But, I want to have checklists for Angie & Steven and I like to have Olivia’s work all entered into My Well Planned Day so she can easily call it up and check off her assignments. We all work better that way. And, if I get it all entered into MWPD – even the assignments for Angie & Steven, it’s really easy to make adjustments when life alters the plan. So, I would love to finally be six weeks ahead on school planning. But I haven’t been. I’ve been going week to week. This week I hope to get ahead. I’m almost done with March for Olivia, and I even have some of her stuff planned on into April. Hers is the most time-consuming. I should have Angie & Steven taken care of by the end of the week. YAY!

A favorite thing from last week...knowing that this week’s break was coming. We needed it.

The planner...planning week, Doug at a retreat until tomorrow (unless the winter storm warning causes them to end early), then a weekend away (and completely unplugged) with Doug.

Because visuals are fun...our snow experiment from last week – determining the actual water content of the snow. Can you tell it was a very, very dry snow? Very atypical for AR snows, but it sure was fun! 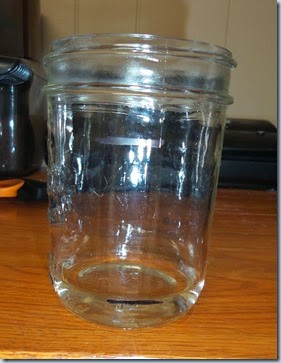