In the great outdoors...chilly and wet after an early morning thunder shower.

Within our four walls...we’ve currently settled down to morning chores after some early morning pinging.

A heart of thanksgiving...for a relatively calm week ahead; for a house that can handle the crazy temperature changes we’ve experienced lately; for the chances the farmers have had to get out in the fields, despite the wet spring.

A heart of prayer...for more dry days for planting; for a productive week this week before heading into a much more chaotic one next week; for sick friends; for the Choates as they prepare to travel later this week (YAY!).

Random observations...It’s been a month since I’ve blogged for personal pleasure, either here or on annhibbard.com. I’m looking forward to getting back to it.

My silly daughter...declared yesterday that we need a family suite in the crazy house. There are days when I’d wholeheartedly agree!

Thoughts from the kitchen...soup, soup, soup? I’m thinking I might have to make a special run to Wal-Mart for spicy cheese soup ingredients. I thought we had our last batch a month ago when it started to get warm, but we’ve had a couple more rounds of soup weather. Mmmmm…I like soup.

On my bookshelf...I managed to sneak in a couple of pleasure books lately – the second half of one of Tricia Goyer’s Amish fiction novels and The Rose of Winslow Street, the only Elizabeth Camden book I had not yet read. Now it’s back to review books. I’m finishing up Thick as Thieves by Susan Marlow today – book one in her Andrea Carter Circle C Milestones series for slightly older kids (although the 8-14 age range would probably enjoy these as much as they do her Circle C Ranch books). Next week I’ll be reviewing a book of Circle C Ranch short stories. I also have a new author to check out – Dina L. Sleiman. Her Robin Hood-like novel Dauntless struck me as one the girls might enjoy, so I agreed to review it.

Meanwhile, there’s the nonfiction – currently Everyday Grace by Jessica Thompson. And there are a few Bible studies on my shelf that I’ve looked through and need to write the reviews for soon.

Can you tell I put reviews on hold for a couple of months while I tackled my writing project? Catch up time!!!

Projects...Purging. Real, deep-down purging. As in, pull everything out, sort it and get rid of it, and then put what’s left back in. So far, that tactic has only been applied to closets, but no room is off limits. The insanity has to be tamed!

Sounds of the moment...the vacuum cleaner in the next room.

From Hibbard Academy...we weren’t going to take last week off, but Mommy entered the week with NOTHING prepared. So, we took the week off. The kids worked on their rooms (not to the extent that I will, but they did make good progress), and I got the rest of the school year laid out. I was trying to push, push, push so we could be done by late May/early June. I’ve given up. We need our mid-school year breaks more than we need a long summer break (although we still will have a summer break). So, now we’re looking at being done end of June and taking July off. Hopefully.

Back to it this week, though!

A favorite thing from last week...dropping off a car load of stuff that we purged. I like letting go of stuff. Another pile is already accumulating.

The planner...not much this week, other than a couple of nights of church activities. That’s nice, considering next week is quite full!

Because visuals are fun...five years ago, we brought this lovable monster home with us. He was so sick. Skin and bones. His head looked enormous compared to his body. We really thought we were just giving him a place to die. You wouldn’t know it today. He’s down a few teeth, and his fur is starting to get that older cat texture. But, he’s healthy and active and very much alive!

Then there’s the beautiful little lady holding him. She gets so much pleasure from the cats. Tolerating the three cats is worth it when I see how much she loves them. 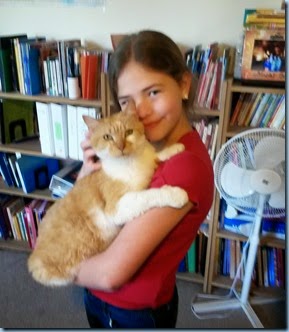 Glad to see you back blogging! And praise the Lord for the flexibility in our lives and homeschooling to take breaks when we need them. Gunnar and I just turned his one week of spring break into two, due to feeling yucky, and then having a cousin/niece visit.

I'm in a soup mood too - probably because so many of us are fighting colds right now. Ah, spring!