In the great outdoors...the massive heat broke last week, and we’re thrilled! We opened windows each night and let fresh air flow through the house throughout each morning the second half of last week. Such delight! The sunroom windows have just stayed open the whole time. Our original thought was that if it’s going to stay between 80° and 90° in here anyway, we might as well have fresh 80-90° air. But, keeping the windows open has actually allowed it to cool down into the 70’s at night, which has made a HUGE difference. It still gets hot in the afternoons, but when there’s a breeze it’s kind of nice.

Okay so most of that was indoors, not outdoors! But there is now a hummingbird feeder on our back porch – there, now we’re back to outdoors! If I’m sitting at my desk instead of standing, I can see it out the window. We have seen several hummingbirds, but they usually go after the vines we’re trying to remove from the fence (they’re tearing the fence up), so we hope to find other ways to keep them around.

Within our four walls...a bit of normalcy (for us, anyway) is settling in. Routine. An expectation for each day and for the flow of a typical week. Even if the kids weren’t specifically thrilled about getting back to school, they are thriving on the routine.

A heart of thanksgiving...that God is in control. No matter what. He’s got it covered.

A heart of prayer...I can’t help but keep praying for the farmers we know and love as harvest is underway!

And, for churches near and dear to our hearts. Yesterday during prayer time, Olivia shared that it was much easier to pray for the whole church in Almyra, as most of them are either farmers or closely affected by farming. Those who are not are easy to add in to a prayer time. But East End is a little harder because it’s not a single-economy church. She asked how she could pray for this congregation. We talked about it a bit, but then Steven, Angie, and I looked at Colossians 1:9-12 during Bible time. I love this passage, I love praying it over churches, and I was excited to share it with Olivia for her prayer focus:

For this reason also, since the day we heard of it, we have not ceased to pray for you and to ask that you may be filled with the knowledge of His will in all spiritual wisdom and understanding, so that you will walk in a manner worthy of the Lord, to please Him in all respects, bearing fruit in every good work and increasing in the knowledge of God; strengthened with all power, according to His glorious might, for the attaining of all steadfastness and patience; joyously giving thanks to the Father, who has qualified us to share in the inheritance of the saints in Light. Col 1:9-12 NASB

Random observations...this cracks me up because it’s so vague:

"Just about everybody who gets snow will have a White Christmas in one capacity or another," [Old Farmer’s Almanac] editor Janice Stillman told The Associated Press.

Meanwhile, as I read back through this, I see that I’m rather verbose today. Can you tell I’ve missed having the opportunity to write much lately?

My silly son...got a bugle for his birthday. Last night, our bedroom door happened to be closed while Doug and I were in the bathroom brushing our teeth. We heard a noise that sounded somewhat like a bugle blast. So, Doug opened the door, poked his head out, and asked, “Did you just blow your bugle to announce that you’re going to sleep?” Steven giggled and said, “Yep!”

I’m not sure what he was announcing with this morning’s blast. At least he IS trying to learn how to truly play it! He’s got a little ways to go, though.

Thoughts from the kitchen...the start of a menu plan! In fact, I had a plan for yesterday, and lunch went so much more smoothly. It’s not so much that I hate to cook. No, I don’t love it like Doug or my sweet friend Joanna does. But I don’t automatically hate it.

What I hate is walking into the kitchen and wondering what in the world to cook. Doug can walk in and get creative. I walk in and become paralyzed in every way.

So, a menu plan is really quite essential for me. Even if I don’t want what’s on the plan for that day, it’s a huge relief to HAVE a plan.

I’ve been without that essential too much in the past few years, and it has shown in our eating habits. We just don’t eat well because I throw something together in a last-minute panic. Planning will help with that, too.

On my bookshelf...I really want to dive into a new novel. I haven’t read a novel since right after our move. But, I’m restraining myself right now to get caught up on some of my non-fiction back log. And, I’m enjoying it.

Our family is trying to make sure we read biographies regularly. The kids are reading a Christian Heroes or Heroes of History biography every month. I’m not sure I’ll get one a month done because the ones I pick are longer. But, I want to tackle one regularly. Currently I’m reading Unbroken – Laura Hillenbrand’s biography of Louis Zamperini.

I’m also reading Everyday Grace: Infusing All Your Relationships with the Love of Jesus by Jessica Thompson. It’s really good.

Projects...trying to get back to writing because I miss it. I finally am forming a cushion in school planning, so hopefully that means I can squeeze in some writing time in the mornings.

Sounds of the moment...no bugles for now! Birdsong and chatter wafting in through the open windows.

From Hibbard Academy...a good start. Steven is learning about the brand new United States finding its footing while also discovering the differences between saltwater and freshwater. I’m learning a lot, too! For instance, I always knew it was easier to float in saltwater, but I never thought about why. I love homeschooling!

Let’s see…Angela is working through Southeast Asian countries, still processing foundational anatomy, and diving into more advanced grammar. Sometimes it’s hard to keep up with what Angie’s doing because she’s so independent! Yes, I assign her lessons, and yes I check them. But, we spend a good portion of our time together doing the read-alouds. It’s fun.

Then there’s Olivia. High school! Physical science, US history, Algebra I, American lit – the normal stuff. She’s also taking a creative writing course that will give her a half credit for writing her novel! Is that not perfect? But what she loves most of all right now is Bible. I’ve worked up some assignments based on Journey into God’s Word. It was written by two of my favorite OBU professors, based on the religion department’s biblical interpretation course. They’d written a textbook entitled Grasping God’s Word (which Olivia will probably work through in a couple of years), but they then wrote this simplified version for churches to use. It’s great for a high school freshman, and she is devouring it! I love grading her work and seeing the thought she’s putting into the questions and assignments.

The planner...enjoy the return of rain and coolness (Thursday’s high is supposed to be in the 70’s!), if the forecast holds up! And, around that, we have an appointment this morning, I have several work meetings this week, church tomorrow night, need to prep for the American Heritage Girls and Cub Scouts school year kickoffs next Monday night.

Then this weekend we’ll head to Judsonia for Grandpa’s funeral. He passed away peacefully on Sunday the 9th, but Dad and Ben had just left for Jordan the day before. Since this was not unexpected, they are finishing out their mission trip and we’ll have the funeral this weekend after their return.

Because visuals are fun...old man Jack is losing most of his teeth. So, he gets canned cat food supplements these days. This is him informing us that he’s ready for more. 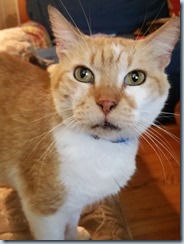 Herding Grasshoppers said…
I love your newsy update :D And I'm with you about having the windows wide open. Of course, we don't have any AC, so there's not much point closing them. But anyway, I want fresh air moving around :D
Glad you got a break in the heat! Today's our hottest (forecast) day of the week and we're gong to the lake - woo-hoo!

Mary Ann said…
Oh how I miss my Hibbard family but reading this I can hear your voice, and I can hear the chuckles around the house. I can even hear that noisy bugle!!
August 18, 2015 at 4:53 PM