In the great outdoors...overcast and cool. Still no rain. Still praying for rain.

Within our four walls...kids are finishing up chores while Doug and I dive into the day.

Meanwhile, we’ve had the windows open through all of the temperature fluctuations, such that now it is cooler inside than outside. As in, we get chilled in the house, then go outside to warm up. It’s great for now. It might not be so great if we have a real winter and have to warm the house back up with the heater. But, for now, we’ll enjoy layering, breathing fresh air, and not having to run the heat or the A/C.

A heart of thanksgiving...for the freedom to cast our ballots peacefully and without fear. This might be an insane election year with many uncertainties that breed a measure of fear, but our fear is not for our lives for choosing one candidate over the other. Even as we watch our nation spiral downward, we are still experiencing a peace that many nations cannot even comprehend.

A heart of prayer...for the American church. Regardless of the election results, we need to decide it’s time to be real!

Random observations...voting is very different in the city than it was in a small town. We have chosen to early vote since moving to avoid the crowds. When we lived in Almyra, we intentionally chose NOT to early vote because of the delight of voting day fellowship. Missing that fellowship today. (And, I must be honest, I’m also missing Mrs. Martha Ann’s divinity and Mrs. Susan’s chocolate cake!)

My poor son...has a strong internal clock. He did well Sunday and Monday mornings, but this morning I noticed his light on around 5:40. I asked him why he was up so early, and he looked at me as if I were crazy. Then his expression changed when he realized it WASN’T 6:45 like he thought. Poor kiddo.

Thoughts from the kitchen...my children have developed quite the taste for Oriental. They beg for it! But, Steven is the most surprising. He always wants it, and he likes it spicy! This from the child who had the most eating problems when he was younger. Of course, it doesn’t hurt that Doug and I love Oriental food, too. We’ll have it twice this week – kung pao yesterday and teriyaki Thursday. Then we’ll have Szechuan chicken and General Tso’s chicken later this month.

On my bookshelf...I have read a little in The Rest of God each morning, but no fiction in almost a week. So, still about halfway through my reread of Shock of Night (book one) while The Shattered Vigil (book two) remains tucked away in hiding to keep from tempting us too much!

Projects...I did finally decide on some homemade Christmas gift ideas for the kids, but since they can all read the blog whenever they want, no sneak peeks will show up these days! Do you know how hard it is to prepare homemade gifts for big kids? They’re always around and much more observant than littles. And, everyone uses the room where my sewing machine is, so it’s kind of hard to hide away.

Oh, I DID get my desk cleaned off! Yay! Victory! Feels so much better!

Sounds of the moment...Smokey on the chair behind me, bathing. She keeps bumping up against a canvas bag I left in the chair.

Rose, meanwhile, is wandering through the house wailing because none of the children are available for her to pounce on.

From the Hibbard Academy...slowly catching up on grading and read-alouds. Again. Allergies and full days have my brain so sluggish that I’m not even sure what we’re learning these days! But, I did just catch up on grading Angela’s poetry lesson from last week. She had to complete couplets, limericks, and haiku. Then, she had to choose one and create her own poem of four stanzas. I won’t share it without her permission, but it was so cute!

A favorite thing from last week...seeing the turnout of volunteers to work hospitality stations at the end of the East End parade. The annual community parade concludes in our church parking lot. So, we set up the popcorn machine and a station with coffee, hot chocolate, and water. We handed out a lot, that’s for sure!

The planner...eye appointments tomorrow, a pastors/wives event Thursday night, and maybe a couple of other things over the weekend. Not sure.

Because visuals are fun...the girls “fighting” over one of their adopted little sisters from church. And you can tell she hates it, can’t you? 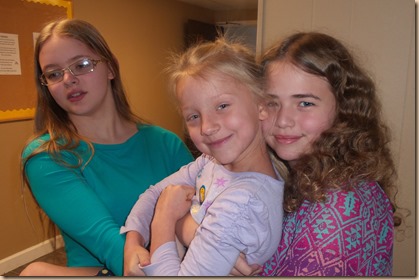 Herding Grasshoppers said…
I love to have a peak into your daily life :D (And now I'm hungry for Chinese food!)
Miss you!