Skip to main content
Posted by The Hibbard Family February 28, 2008

Amazingly enough, Olivia and I are done with school VERY early today, so I thought I'd let you know about the wonderful gift God gave us through one of my directors. We had budgeted a little extra money for school this time around, hoping to establish a collection of craft supplies both for art for the girls and for some of the energy direction for Steven. The biggest thing on the list was paint - I wanted washable tempera paint and finger paints. Because we knew we needed that, everything else was tentatively on the list IF we had the money. I was asking the craft director at MDO about typical prices on tempera paint (to make sure I shopped at the right place and didn't pay too much), and she said, "Don't buy it yet!" She then proceeded to tell me about some that she had that she was never going to get around to distributing to smaller containers, and she offered them to me! Then she told me about some extra finger paints she had at home that she was never going to get through (they were the ones leftover AFTER she used all she could at MDO!), and offered them to me as well! 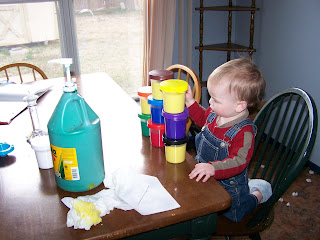 As you can see from this picture, the jugs aren't small! There were six gallon-size jugs. Three were almost full, one half full, and the other two almost empty, but even the almost empty yellow filled four of the paint cups you see Steven stacking and the almost empty red filling just over one cup! MORE than enough to last us for at least a little while! 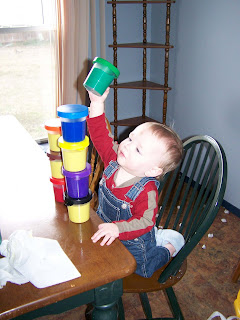 Steven had a great time stacking the cups once they were filled. He LOVES to stack! 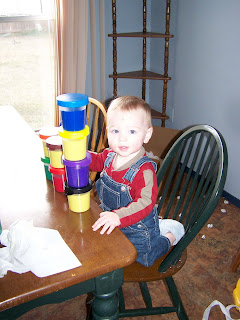 Isn't he cute? Anyway, because we didn't have to buy paints, we got to purchase everything else on our list plus a couple of extra things. God is SOOOO good to provide for even the simple little things like paints! Isn't it fun to serve our God?
Email Post