In the great outdoors...It’s actually starting to feel like late April, with today’s high creeping up close to 80. While it is a gorgeous day, I’m definitely NOT going to complain about the fact that it has not felt much like April this month. I’ll take the cool as long as I can get it!

Within our four walls...open windows, but not quite the cross-draft we like to enjoy. We seem to have misplaced the tension rod for the screen that we hang inside our front door to allow us to leave it open for an extra breeze. We’re trying to brainstorm where it might have run off to. It’s a bit stuffy in this room right now because we can’t open these windows, but it still isn’t  uncomfortable. It hasn’t made me get up and turn on the fan yet.

A heart of thanksgiving...for a slow mosquito season. They’re out there, but the kids have played outside a lot the past few weeks, and they really have not suffered many bites. Such a blessing!

A heart of prayer...for schedule wisdom. Doug and I are both about to hit summer schedule time and we need to make some adjustments.

Random observations...my to-do list for this week is out-growing its sticky note. Perhaps I should find a safe spot for it anyway.

My silly children...are getting super excited about the pool now that they can wear shorts and sundresses in the afternoon. I can only say, “Remember those nights in the 40’s and days in the 50’s and 60’s we’ve had lately? Yeah, the water remembers too!”

Thoughts from the kitchen...spaghetti today, accompanied by homemade banana pudding that did not set. Believe it or not, it’s the first time I’ve ever made banana pudding, and I’m not sure what I did wrong. It was still good though.

Anyone have a banana pudding recipe that they just love?

On my bookshelf...(well, they’re not actually on my bookshelf yet – I just rotated the picture to make it look like they’re standing upright!)

They actually represent something really awesome. This week I start a short-term editing job with Home Educating Family! The first two are part of my reference material for the job and the last one is more of a guide or training material. Yes, I’m incredibly intimidated, but I’m also exceedingly excited!

Projects...I’m working on a knit shrug now, and this pattern is SO much easier than the crochet pattern!

Sounds of the moment...the computer humming and Doug talking on the phone in the next room.

Last week we learned...that the glass insert of a thermos will explode under the right circumstances. I was preheating the thermos so I could put Choffy in it to take with us for a day of school at the church with Doug. All of the sudden it literally exploded! Not shattered – exploded. Fortunately, the plastic outer portion of the thermos held most of the blast, but some shards did fly up and out, landing halfway across the kitchen or on top of the freezer. Fortunately, none of them got me, and the kids were safely playing in the back of the house (where they DID hear the explosion). And yes, once my heart stopped beating out of my chest, I thought it was really, really cool!

The planner...school (only three weeks left, two of which are not full weeks!), my training begins on Wednesday, and hopefully a field trip on Friday.

Because visuals are fun...my irises are finally blooming! The kids noticed this morning and came in to tell me. I’m not a flower person, really, but I love irises. My favorite is the black iris, but these were much cheaper and still promised a gorgeous color. I’ll get pictures with the better camera once they bloom a little more. 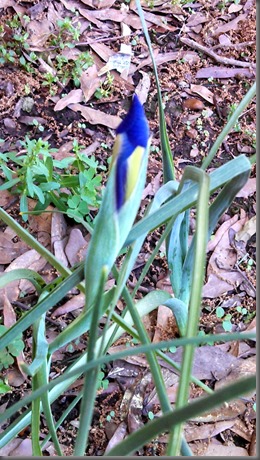 I love these weekly peaks into your life :D Hope you find the bar for the screen - I love having a breeze blowing through, even if it's on the cool side. Fresh air! Congrats on your editing job - hope it goes well!

Oh, I love those blue Siberian irises. A neighbor gave me some (bulbs? rhizomes?) a few years ago and they will spread so you can divide them. I love having clumps of them around because even when the flowers are done I like the tall grass-like leaves :D

Choate Family said…
So excited for you to have this new challenge with the editing job!
May 1, 2013 at 4:44 PM