In the great outdoors...getting colder by the hour as we wait for “Cleon” to officially hit. Will it fizzle out to just cold temps or truly be the ice storm craziness being forecasted?

Within our four walls...laundry is done, phones are being charged, and a fire is built. We’re as ready as we’re gonna be!

A heart of thanksgiving...for a fireplace and gas water heaters.

A heart of prayer...for those who have to work out in this wintry mess.

Random observations...I spent today focusing on work tasks that absolutely had to be done if we lose power as predicted. Now I hope we don’t lose power because that means I’m finally getting ahead – a huge goal of mine between now and Christmas break!

My silly children...well, let me just share a conversation from today.

Angela: “No, we’re just misunderstanding each other!”

Me: “Well, misunderstand each other with sweet tones in your voices, please.”

Thoughts from the kitchen...methinks soup will be somewhere on the menu for this weekend.

On my bookshelf...review books awaiting review.

Projects...working on some knitting projects right now. I’ve restarted one three times. I got a good ways on it before I realized that the needles I thought would work just weren’t going to do the trick. But, in trying to improvise, I messed it up too much to salvage. So, starting yet again! Fortunately, it’s a relatively quick project!

Sounds of the moment...kids jabbering as they finish supper.

From Hibbard Academy...it’s been a bit of an odd week. We were gone Tuesday, and I had no voice yesterday. Still plugging along, though! Two more weeks!

A favorite thing from last week...watching as my children did much of the Christmas decorating. That was fun!

The planner...much of it has already happened. Work meeting day on Monday. Denominational meeting day on Tuesday, followed by a recipe party with the ladies from church. Church on Wednesday. Today I was supposed to go to Bernina Club, but was still recovering from voiceless Wednesday. So, we had a mostly relaxing stay-at-home day today. I think that will continue through the weekend! Read might be back on Saturday – if Cleon peters out and his mom has to work.

Because visuals are fun...Angie found this leaf. I’ve never seen one this big! None of the trees we’ve seen in town have leaves this big, so we’re not sure where it came from. 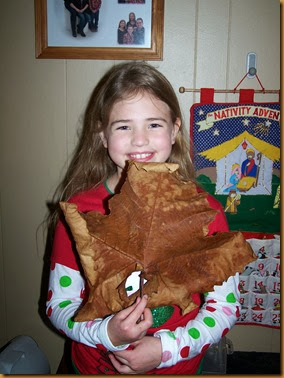 Herding Grasshoppers said…
I think that leaf came from around here - that's a big-leaf maple!

Love the conversation and especially the "Yes Ma'am!"

The Hibbard Family said…
Thank you! We knew it looked like a maple leaf, but most maple leaves we've seen are about a tenth that size!
December 6, 2013 at 12:48 PM