Within our four walls...quiet, for the moment. It’s currently a little after 8:00 in the morning, and the kids are supposed to be working on chores. But it’s awfully quiet.

A heart of thanksgiving...for both a fireplace and a heater; for a nice stack of wood; for a “normal” week; for provision in all things, even when it’s hoped-for rather than currently present.

A heart of prayer...for the aforementioned provision for several friends and ourselves; healing for others.

Random observations...my perfectionistic tendencies are coming out in odd ways, I think. I used to be very OCD in many ways, but Doug has helped me relax that. For a while I became embarrassed of any perfectionistic tendencies, so I tried to force myself to be okay with imperfections. Now I think I’m learning a balance. Sometimes it’s okay to like things just so. Even though it doesn’t hurt to have them mussed up a bit, it also doesn’t hurt to have them just like I like them. It will probably take the rest of my life to learn that balance.

My silly children...are now emptying the dishwasher. And jabbering away. There are so many times when I hear them jabbering but can’t really tell what it is they’re saying. Now is one of those times. Not sure I really want to know!

Thoughts from the kitchen...hmmmm…I should probably check on the lunch plan to make sure I don’t need to prep anything this morning.

Homemade pizza. I suppose I should go see if we have appropriate meats for it. Because I’m a meat pizza kind of gal. The more meat, the better!

Of course, there’s always no-bake chocolate oatmeal cookies. Dark chocolate, nonetheless. We could have those for lunch instead. I’d earn lots of brownie points from my children for that one.

Speaking of brownies, Alton Brown posted that if you bake your brownies for 15 minutes, take them out for 15 minutes, and then put them back in to finish cooking, you’ll have gooey brownies. Yum!

Think maybe the dreary weather is having an effect on me? I just want to eat junk food. Not good.

Oh! We did discover something fascinating this week. I absolutely love halloumi, a Cypriot cheese. Actually, the whole family loves it. But, it’s expensive. And can only be bought at certain stores. That kind of thing happens when it can only be made on the island of Cyprus. This week, though, Doug fried up some mozzarella. Something about the way he fried it made it taste a whole lot like halloumi. Not exactly. But definitely enough to satisfy the fix now and then. Very nice.

Okay – now I’m done with my junk food ramblings. Maybe that will get it out of my system and I won’t have to fight the “eat everything in sight” temptation all day.

On my bookshelf...it’s time to start reading my Christmas books. Also, I have a new novel to review.

Projects...sorting through pictures for calendars. I used to keep all of our pictures so well organized. It’s been a while. I need to get back in that habit!

Sounds of the moment...bells jingling as the kids get something from the hall closet (there’s a bell-laden hanger on the closet door – I probably should have chosen a better place for it!).

From Hibbard Academy...just pushing through until Christmas break. Diligence. Two and a half weeks. We can do it.

A favorite thing from last week...good visit with the Browning side, decorating for Christmas, and seeing Christmas sewing projects come together well.

The planner...pretty tame this week. A busy stretch starts on Sunday with our first Christmas party.

Because visuals are fun...the picture’s a bit blurry, but here’s our new Calliope Designs ornament for this year. I love our penguins! 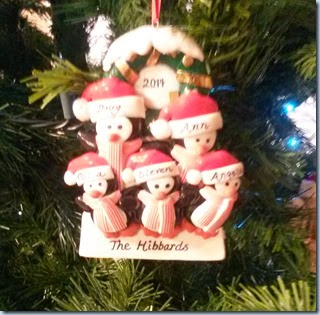 We bought our first one Christmas of 2000 when I was pregnant with Olivia. Isn’t that adorable? They were real clay dough at the time. 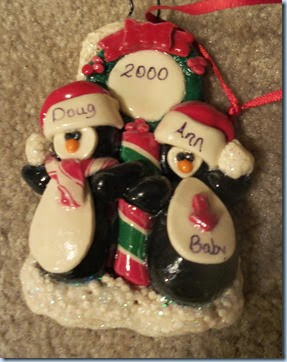 We had a few gaps over the years (they were hard to find before the web store opened). And we’ve bought a few extra special individualized ornaments when we’ve had the chance. But imagine our surprise when we opened the package this year and saw this surprise from the owner of Calliope Designs… 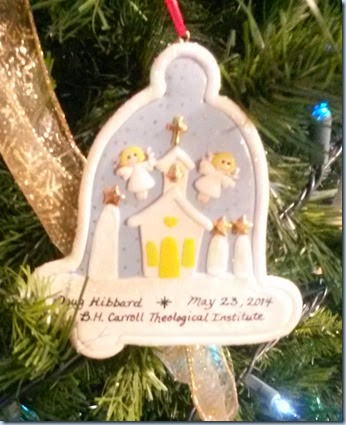 Yes, I cried. So special!

Herding Grasshoppers said…
Is that ornament for Doug's graduation? How awesome that they did that for you!

I'm with you on finding the balance between I-want-things-the-way-I-want-them and let-it-go. Whew.