In the great outdoors...a sunny fall day. We probably need to tackle the leaves in the front yard. Not too motivated to add that to our busyness, though.

Within our four walls...I’m not sure I can get past the attitudes sharing the couch with me. Both cats are here, and they are in a mood. Their behavior the past few days shows that they miss Jack.

A heart of thanksgiving...for just over five and a half years with Jack. 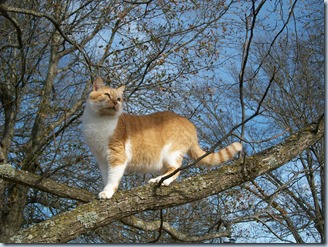 When we rescued this monster, he was skin and bones and so very sick. His fur was so dirty and unhealthy that the white was almost not even visible. His head looked three times too big for his body, and we really thought we were just giving him a comfortable place to die. Then he miraculously recovered, and this old cat seemed to almost become youthful again for a while!

There have been several times over the years that his health issues have made us think we were about to lose him, but he always rebounded. This last time, though, we knew for sure. It was really real. So, we all started preparing, and the kids made sure to hold and love on Jack most of Thursday and Friday. 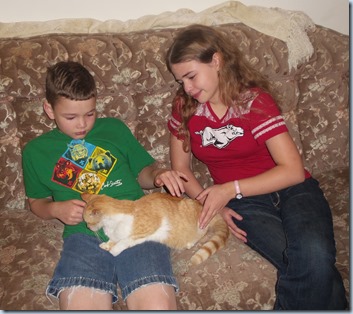 We had a bed fixed for him indoors, but he didn’t ever want to stay there. He insisted on going outside. When we couldn’t find him Saturday morning, we knew. Sure enough, our neighbors found him on their front doorstep Saturday morning (I hate that for them, but appreciate so much the way they took care of him!).

Our old man cat drove us crazy at times – okay, lots of times – but he was a sweetie. Thankful to have had him for as long as we did!

A heart of prayer...for friends who continue to battle health and other issues. For our churches. For our hearts as believers to be turned to Christ alone, undistracted by the piddly little things that tend to turn our heads so easily.

Random observations...Three weeks. I let three weeks go by without writing a thing. I didn’t even finish sharing about our fun bloggy friend adventures! My struggle to keep up with writing reminds me just how much  I struggle with discipline. Discipline of my time, energy, and thoughts. Which leads to a deeper question of what I allow to control my time, energy, and thoughts. Is it Christ, or is it me and my whims? Yeah…too often it’s the latter. It’s not about how much I get to write. It’s about a deeper issue of surrender. That HAS to change. And when it does, hopefully the writing will become more regular, too. But, if not, I will at least know that I have the real issue taken care of, knowing Jesus can handle the rest and the Holy Spirit can and will guide me to what I need to be doing.

My amazing children...inspire and bless me so greatly. They have such security, trusting the authority and sovereignty of God, yet also resting fully in the knowledge of His love. I see it in their transition after the move – even though they still have tearful days because they miss Almyra, they show no bitterness or regret because they, too, know that God brought us here. And they’re determined to fully root themselves where God has planted them.

And, even though a cat holds no comparison whatsoever to a grandfather, they handled Jack’s death so well, too. We didn’t have to discuss whether or not there’s a cat heaven or anything along those lines. We simply got to talk about God’s blessings and how He blessed us with Jack. They were very quickly able to talk freely about him and his absence.

I don’t really know how to put into words what I’m seeing in my children, other than to call it confidence. They are all still so young in their faith, but they know God’s control and His love. That’s enough for them. I love that!

Thoughts from the kitchen...a crock pot full of water warming a bag of frozen something – my friend this week.

On my bookshelf...making good progress toward finishing Everyday Grace. I’ve really enjoyed that one.

Meanwhile, two review books on my coffee table. Ishtar’s Odyssey is an Advent story that I’ll be reviewing next week.

But, then there’s the really distracting one. The one that makes all of the discipline I discussed earlier much, much harder. 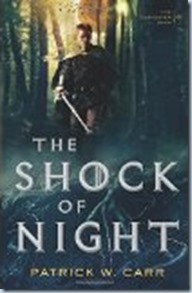 This one was so long-awaited. And, in typical Patrick W. Carr fashion, I am more confused with every page turn. But also more intrigued. Unfortunately, this is just book one in The Darkwater Saga. Which means I have to wait for the rest. Yeah. I might have to go back and reread The Staff and the Sword series while I wait.

Projects...Christmas stuff! My sewing machine WILL come out soon!

From Hibbard Academy...plugging along. They’re so independent these days that they even do a lot of their own grading. It’s helpful, but it makes it harder for me to remember exactly where we are!

A favorite thing from last week...the Annual Meeting of the Arkansas Baptist State Convention was last week. Seeing people is always fun, but our favorite stretch of the meeting is the Tuesday night service. And this year, several church members joined us! We’ve been talking up that particular service for years, encouraging people to join us. This is the first year anyone has taken us up on the invitation. It was so much fun to have others come and enjoy the service with us. (Next year it will be in Little Rock the last Tuesday of October. Come join us!)

Even James the Big Cow got to attend the last service on Wednesday morning. 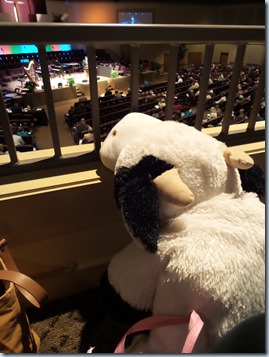 The planner...a pretty full week of meetings and activities, including friends coming for a little while this morning, a ministers’ wives event tonight, a couple of meetings this week for Doug, normal church activities, and AHG and Scouts events this weekend. The girls and I have a mother-daughter activity, and Doug and Steven have a Webelos hiking activity. Lots of social interaction right on the heels of the convention, so we’re probably going to resemble hermits by next week. But, we’ll have fun in the meantime.

Because visuals are fun...Steven snagged his sister’s famous hat. (It’s hilarious the number of people who have tried to buy this hat off of Olivia!) Looks pretty cute on little brother, too! 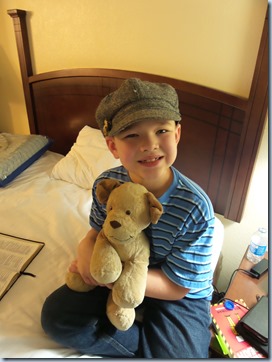 Herding Grasshoppers said…
Sorry about Jack :o(, but good to hear how the kids are all doing. And glad you're back! (But I know full well how LIVE takes priority over blogging!)
Julie
November 10, 2015 at 10:14 AM

Choate Family said…
I love how you have trained your children, and in tough times (like transition or death) the training and modeling of godly behavior you give shines!
November 10, 2015 at 10:39 AM

Mary Ann said…
Poor Jack, I knew his time was soon to come when I saw him last week but I knew he was being loved on by all of you. I know you & the kids will miss him greatly. Please tell the kids that I'll pray for their them as they face each day missing Jack. Love & miss you all everyday!!
November 10, 2015 at 4:27 PM