In the great outdoors...the after-effects of a very wet couple of days. The sun peeking through clouds, shining down intermittently on yellow and brown leaves is quite stunning. I love fall!

Within our four walls...much sniffling and sluggishness.

A heart of thanksgiving...to be feeling better after of weekend of feeling rotten; for a roof that doesn’t leak; for reports that yesterday’s storms only caused minor damage – no major tornadic outbreaks; for four weeks without hives; for kids who not only are independent, but who also enjoy worshipping together, even if it’s at home and combined with a bit of silliness.

A heart of prayer...for our churches; for safety as hunting season is well underway; for friends as they go through their daily lives.

Random observations…sometimes being tired is not only about lacking sleep or running non-stop. Sometimes it’s also about not being able, for whatever reason, to spend time on the things that energize us. Not recreationally, but spiritually and relationally.

My sweet children...are so very tired. And, I think it’s the combination of a hefty schedule and the aforementioned lack of re-energization.

Thoughts from the kitchen...the kids are SO excited because they’ve been asked to fix baked potatoes for lunch today. They have really, really, REALLY missed being a part of Wednesday night suppers, and baked potato night was one of their favorites to prepare. They had quite the system going. When we asked them to prep a bag just for our family today – some for lunch and some to turn into potato soup later in the week – they all acted like we’d just handed them an early Christmas present!

See what I mean about things that energize us?

On my bookshelf...Ishtar’s Odyssey is up for review this week. I’ll probably post it here as well as on The Joy of Writing since it’s a family Advent story.

Then there are all these books I want to read: 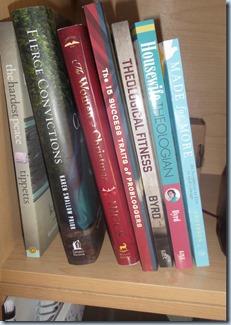 Oh, and I just received notification that I’m on the list to review the latest from both Elizabeth Camden and Julie Klassen in just a couple of months! These authors are like Tricia Goyer and Liz Curtis Higgs. They don’t write fluff. They write stories with depth. And I learn about nuances of history I’d never known before. Yes, I’m just a bit giddy!

And I have just enough room on my Goyer/Camden/Klassen shelf for these two – and maybe one more!

Projects...the sewing machine still needs to come out. But, knitting is in progress. Hopefully it will turn out – it’s a rather odd pattern.

Sounds of the moment...the dust vac running in the living room.

From Hibbard Academy...we’re a little slack this week, just because we all desperately needed to catch up on sleep (evidenced by the fact that my typically early-to-rise children are having trouble rousing themselves before 8:00 this week, if even that early!).

A favorite thing from last week...seeing my girls embrace a decision that was forced upon us.

We were supposed to go on an American Heritage Girls mother-daughter camp weekend. I’d been battling gunk for a week or so, but by Friday morning, I was for-real sick. I’m rarely for-real sick, folks. VERY rarely. I might feel yucky and need to slow down, but rarely does sickness get me all the way down. But Friday morning I knew I couldn’t spend the weekend at Camp Paron. And sure enough, I spent the next three days on the couch.

I was in tears as I told the girls, but they were just fine! They’d been so excited, but that morning, they were almost relieved to be staying home. And they had such a GOOD weekend together. Truly enjoying one another’s company. So thankful.

Oh, and then there was Sunday morning’s home church. That might require a separate post. It was fun!

The planner...We just finished a couple of pretty busy, full weeks. This week is nice and slow before heading into Thanksgiving week. What a blessing!

Because visuals are fun...Steven came in all excited just now and said, “Mommy, there are rainbows on the living room floor!”

Obviously, my poor photography skills just could not capture the beautiful patterns on the floor. But I still tried! 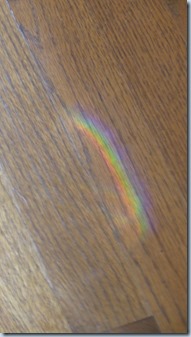 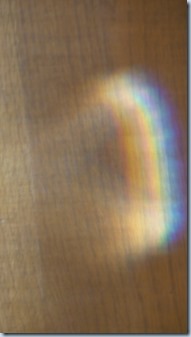 Sorry you're all still battling the sniffling/sluggish feeling, but glad you're on the upswing. Isn't it wonderful who have such helpful kids, who roll with the punches? And four weeks with no hives - yay!