In the great outdoors...warming back up a bit today, but yesterday was amazing! It barely got into the 80s! After a month of insane heat, it was so invigorating! This morning is still rather pleasant. We’ll see what happens this afternoon.

Within our four walls...determination. We’re all so scatterbrained and still very behind on rest.

A heart of thanksgiving...that we are all back under the same roof – and in the same country – and on the same continent, for that matter!

A heart of prayer...for so many needs at church; for wisdom in a variety of things.

Random observations...I’m such a horrible salesperson. Really I am. I recently signed up to be an essential oils distributor because I wanted the kit, and because we’re finding more and more just how well the oils are working for us. But, this will probably turn out to be like my years with Mary Kay have been. I just don’t sell things well. But, if you have any questions or want a kit, I can hook you up! Haha!

My silly children...are settling in well to a new school year.

Thoughts from the kitchen...General Tso’s chicken bowls today. Mmmmm. Steven thought we were having them yesterday and got all excited. It’s fun that our children have caught on to the delights of Oriental food!

On my bookshelf...I’m trying Jane Austen again. I do understand that, at this moment, many of you are aghast that I am not a Jane Austen fan, but I’ve never made it all the way through one of her books. I don’t know what it is about her writing that I struggle with! I mean, one of my favorite books as a teen was Jane Eyre, and her writing style is not any more challenging than Charlotte Bronte’s. Perhaps it’s because I didn’t have access to Jane Austen as a teenager and didn’t try to read one of her novels until I was a sleep-deprived young mom!

But, Jane Austen’s work is referenced constantly, and I want my girls to at least give her novels a try. So, I’m diving back in.  I like the 1995 movie version of Sense and Sensibility (Colonel Brandon might be my all-time favorite Alan Rickman role), so that’s where I’m starting.

And no, I’ve never seen any version of Pride and Prejudice. Yes, I know. It’s appalling.

Projects...getting ready for a birthday tomorrow. All three kids in double digits! Also, finishing up the last few school prep items I didn’t get done before we started.

Sounds of the moment...sirens somewhere on the main thoroughfare near us. We’re not far from the fire station, so we do hear sirens rather frequently. Today I think they’re testing – or perhaps just playing with – the sirens because of the abrupt on an off and the seeming silliness of the siren patterns. It’s making us chuckle.

From Hibbard Academy...Olivia is starting church history this year. Oh my. We’re having fun!

A favorite thing from last week...Saturday night. Doug came home. Nothing can top that!

The planner...we have an OBU alumni gathering tonight for the opportunity to meet the new president of Ouachita. I’m looking forward to that. Steven’s birthday tomorrow (which will probably stretch somewhat into Thursday since tomorrow is Wednesday). Otherwise, a normal week.

Because visuals are fun...it’s our sprawling tomato plants. Yes, all of that is tomato. Yes, we gave up trying to control or support it because there are four or five different plants there, all sprouted from last year’s fallen tomatoes. I have no idea if we’ll ever get any fruit from it, because so far we have just seen a few yellow flowers, and it’s getting pretty late in the season. But, we’ll see! 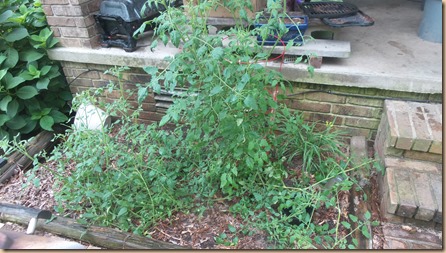 Herding Grasshoppers said…
Good for you, for posting! I keep meaning to, but have kind of taken an unplanned break from blogging this summer. Oh well.

Good luck with the Jane Austen. I tried. Really. But I wanted to knock everyone over the head. (The characters, not my family!) Ack. I'll pass ;D

So glad Doug is home again! What was he doing on this trip?