It’s sunny and a bit chilly this morning. Everything looks so bright and clear!

It’s been a long week. Between a weekend of late nights and the colds we’re all trying hard to fight off, we’re alternating between feeling draggy and crazy. Oh wait…we’re always crazy!

Morning posture says a lot for how the emotions are flowing for my children. This one says, “I’ve had a little too much ‘people’ lately and need some re-energization.” Stuffed cows are good for that. 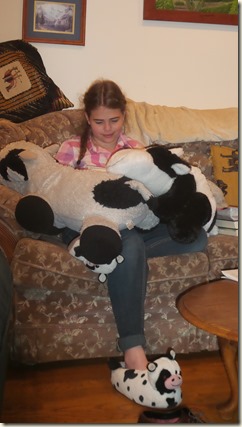 It’s amazing how one little word can make you think. Apparently, whenever I read Luke 12, I perceive the word “give” to be the verb in verse 12. But, that’s the word Mark uses (Mark 13:11). Luke uses the word “teach.” There is an interesting depth to considering this concept from the perspective of both words. I read the Luke version earlier this week, and I’m still hashing it out. I believe it will end up as tomorrow’s blog post on annhibbard.com.

Our church; the Choates as they process through a busy couple of months; the needs of friends; my own to-do list and schedule and the need to process through it all with diligence while also not falling back into the “no room for margin” trap.

The sunshine; the persistence of cool days, even in the midst of the warming temperatures; friendship.

We always head up to church right after lunch on Wednesdays and spend all day there. The kids usually take a movie with them – the one time they watch movies, actually, unless we have family movie night. They created a list of movies they wanted to get watched, and Angie has them scheduled out through June (because that’s as far as her planner goes!). Yesterday’s film of choice was The Emperor’s New Groove. So, last night, supper conversation pretty much consisted of movie quotes. There are quite a few great quotable lines from that movie! Then there are others that definitely require context. But, as long as you have that context, they are quite funny!

Finishing up my writing project – due next week.

About a month ago, Olivia discovered a new word. I was determined to let it not be true of me with this project. The word is aglyphicate: To avoid or to put off a writing assignment until the very last possible moment. I must say that I haven’t intentionally put off the project, but it has been a really crazy couple of months. So, yep, I’m now down to the wire.

The other day, I calculated how much work everyone has left for the year. They are all doing so well! Much of the work will be done by the second week of May, which is really astounding. Some will push on until the end of May, with the goal being to be completely done by May 25.

Meanwhile, everything for the new school year is sitting in the next room waiting for me to sort, organize, and begin planning for the fall. Summer is going to be so full that I’d really like to get a head start on the prep work now. Once I finish aglyphicating. :)

Smiles on my children’s faces. Of course, ice cream does tend to bring out those smiles. 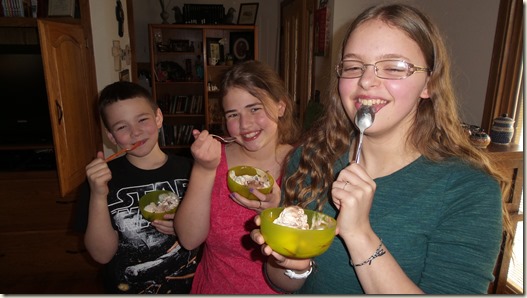 A dinner engagement, a date night, and a deadline. Then there are the things that aren’t “d’s” such as a shopping trip for seasonal clothing needs and National Peach Cobbler Day. According to Steven, it falls a week from today and must be celebrated. Who am I to argue?

Choate Family said…
Thanks for the tip about National Peach Cobbler Day! We'll have to see if we can rustle up a can of peaches around here :-)
April 7, 2017 at 1:10 AM