Using a curriculum like Sonlight is a wonderful thing, too, because it isn’t bound by grades. We can combine our kids and stretch it out or shorten it without worrying about getting too far ahead or behind.

And, homeschooling itself is great because we can let each child move at his or her own pace. Or, when something doesn’t work (like language arts), we can switch gears mid year without worrying about the fact that we won’t be able to finish the book before a defined point of time.

But, it also causes a little bit of confusion. While many homeschoolers still work on a very traditional school system with defined grades, many of us don’t work that way. So, if you want to confuse many homeschooled children, just ask them what grade they’re in. You’re likely to be answered with a rather confused stare as they ponder the question!

Many families don’t have a problem with their kids not really knowing what grade they’re in. But, we like for our kids to know. Up until this past year it hasn’t been too hard, mainly because they’ve been working through their math and language arts books right in line with what grade they’d be in were they in public school. But, this year was different. First, there was the aforementioned mid-year LA switch. Second, we’ve let Angie speed up in math and Olivia slow down a little bit to meet their individual needs. So, between that and the fact that we’re actually at the halfway point of our current curriculum, it was hard for them to answer the What grade are you in? question.

So, we came up with a solution. While everyone else is celebrating “Back to School,” we decided to celebrate “New School Year.” That happened this week.

Monday’s weather was forecasted to be beautiful, so we decided to surprise the kids with a trip to the zoo. We took a giant decorated cookie and enjoyed a celebration day. (Pictures of all of that to come.) That marked the separation between the old school year and the new.

Then on Tuesday morning, we pulled out new folders, pencil cases, crayons, and glue sticks. 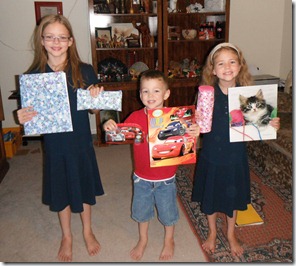 We cleaned out their book crates and reorganized them for the new year. So, as of Tuesday morning, all three kids were officially promoted: Olivia to fifth grade, Angela to third grade, and Steven to kindergarten.

It was really quite neat how just giving the day that attention helped make everything seem fresh! Nothing else was really new. And yet the celebration of the new year just gave us all the refreshment we needed.

One thing did change for Steven. Up until this week, I’ve planned independent work to have on hand when he’s needed it. When he wanted to do some work, I’d show him which page to do. But, starting this week, I have made him his very own independent work checklist to put in his folder just like his sissies. He was so incredibly excited! It has given him such pride to be able to read his own assignments, find the pages himself in each of his books, check off each assignment when done, and then hand me his completed work to check when we come to “Work with Mommy” time. He has had a fantastic first week of being an official kindergartener.

And then you have my silly girls. Several years ago there was a plain blue dress mixed in with a bag of hand-me-downs.

They loved that dress! I had to chuckle because I knew the dress was a school uniform. Olivia outgrew the dress about three years ago, and Angie outgrew it last year. Both of them have wanted another one since then! So, when school uniforms came out this year, we went ahead and got each of them one. They were so excited! We finally had to tell Olivia that she had to put hers in the laundry after wearing it to school three days this week!

Yes, I would say that a “New School Year” celebration did the trick beautifully.

Herding Grasshoppers said…
Wow! A 5th, a 3rd and a "Kindie". That's the ages my kids were when we started homeschooling!