So, how does a five-year-old boy celebrate his birthday? Cars style! We typically don’t do “parties” beyond whatever extended family can show up. But, this time Steven really wanted his friends from church to come celebrate with him, especially since we’ve been welcomed into their family and invited to share birthdays with them! So, we planned his party for Tuesday night. Then Steven decided he wanted to do all of his celebrating on Tuesday instead of waiting until Wednesday. So, all day Tuesday he was “pretend five” while we celebrated. Then he got to wake up on Wednesday and be “real five.” What fun!

The day started with a sausage ball breakfast, per the birthday boy’s request. After breakfast the girls and I wrapped presents and “hid” them in my room. He found them! I hung the birthday train banner and some balloons in the living room and got all of the presents moved in there for pictures. 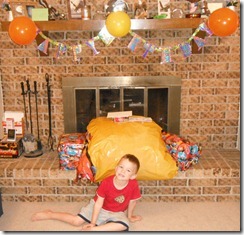 While we waited for pretzel dogs to cook for lunch, Steven opened presents. The girls were so excited about his birthday this year because they were able to spend money to get things he really wanted, and they’ve been holding on to them for months!

Angie got him a Razorback helmet and jersey, and then dug in to her true specialty – construction paper gifts. She made him all sorts of things that he loves, from Star Wars ships to cutouts of his stuffed dog! It was so sweet to watch them go through the bag together! 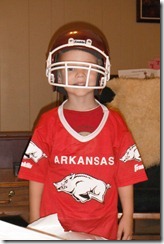 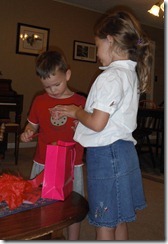 The girls used their Christmas money this past year to buy 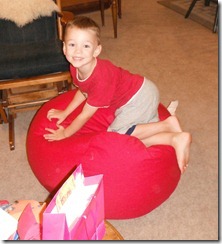 themselves large bean bags. They’ve loved them, but they were a little sad that Steven didn’t get one (he chose other things with his money). So, way back in March, Olivia found this red one and decided that this was what she was getting Steven for his birthday. It’s been hard to hide it all this time, and even harder to keep Steven from using his own hard earned money to buy one himself! He was delighted!

He opened the rest of his presents, then moved on to lunch and naptime while patiently awaiting the arrival of UPS. He had gotten birthday money from his Grandma and PopPop a few days before and had used it to order a Lego Mack from Cars to go with his Lego Mater. It arrived, and he and Doug worked hard to get it assembled. 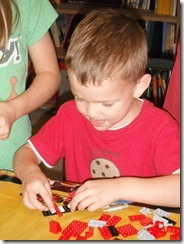 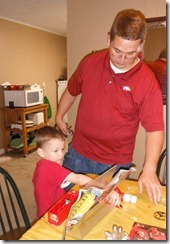 I was so proud of the way he followed directions and stuck with the project. This is the first big Lego kit he’s assembled – the others have been small vehicles with under 20 small steps. This had two instruction booklets with four separate sets of steps. He is SOOOOO proud of his Mack! 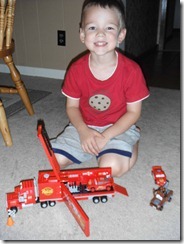 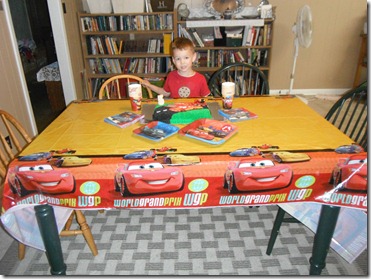 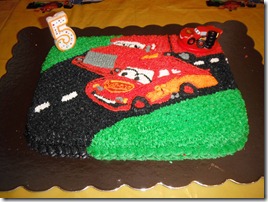 He had his four friends and their younger siblings over for pizza.... 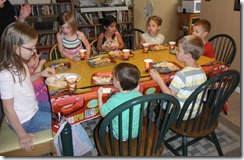 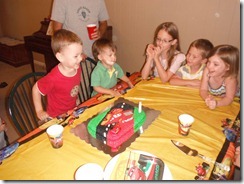 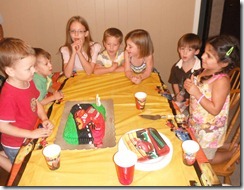 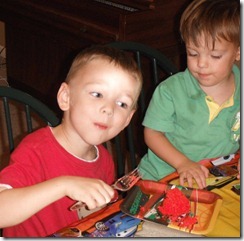 …followed by lots of play time! A fun way to end a fun day of celebration. And that, my friends, is how a little boy – well, our little boy, anyway – celebrates turning five! I think he planned his day pretty well!

Herding Grasshoppers said…
I love the pics and his GLOW of pride at the Lego creation he put together! Welcome to the Lego years ;D

And oh-my-word-that-is-a-house-full-of-LITTLE-kids! Hope you have a restful day,

The Hibbard Family said…
It WAS a house full of little ones! Steven was the oldest of all of those little ones! :-)

It's funny - we have a gazillion Legos, and Steven has played with Duplos or Legos literally all his life. But there's something about that first big kit that just is totally different. It's fun!
August 14, 2011 at 7:08 AM