In the great outdoors...humid and mild, a combination of sun and dark clouds. Really quite beautiful! According to the forecasters, storms are coming tonight and tomorrow’s high will be lower than today’s low. By the looks of things, I believe it! Pre-storm weather can be truly gorgeous.

A heart of thanksgiving...for my husband and his willingness to stick with me for fourteen years! (I wrote an anniversary post on my other blog: Fourteen Years.)

A heart of prayer...for the couple whose wedding we attended Saturday. The wedding was so much like ours in so many ways! And I love this couple dearly. Praying for them as they return from their honeymoon today and dive in to real life together.

Random observations...projects go much more smoothly when you don’t lose the tools you need to complete said projects. (Fortunately, I finally found the tool I was looking for yesterday – in the drawer where I had already looked three times!)

My silly children...were living a musical yesterday afternoon. I was in the library sewing, and they were in the living room singing their conversation. They reminded me of Larry the Cucumber in Lyle the Kindly Viking.

Thoughts from the kitchen...I’m supposed to be cooking? Really? Oops! In other news, when Doug and I were out and about for our anniversary celebration on Monday, we stopped by Kroger and found our favorite date night meal! We love PF Changs, and we discovered their Home Menu line a while ago. The Firecracker Shrimp is our all-time favorite, but our local Wal-Mart stopped carrying it. We may or may not have stocked up a bit when we found it at Kroger!

On my bookshelf...the rest of the the Liz Curtis Higgs series that I’m determined to finish very, very soon.

Projects...I wish I could show you a picture of the project I finished last night! Many times the projects I make up as I go along aren’t worth much. But, I am so pleased with the way this particular gift turned out! Today we will hopefully finish up sock dolls and their outfits, after I get a bit of writing done.

Sounds of the moment...the kids cleaning the kitchen for me while I write so we can jump right into sewing when I’m done.

A favorite thing from last week...attending the wedding as a family. But then there’s this week! We were supposed to take our kids to their beloved JoJo’s house Monday morning so Doug and I could go celebrate our anniversary. We planned to pick them up Tuesday morning. But they ended up going home with her from church Sunday night! It was strange, but in a fun way, to wake up two mornings in a row to no kids in the house! The cats weren’t too sure about it, either.

The planner...finishing up Christmas presents and baking Christmas cookies the rest of this week. We’ll also join some of Mom’s family for a Christmas gathering Saturday night.

Because visuals are fun...my new niece was supposed to arrive by c-section tomorrow. She had other plans! Doug and I had barely arrived in Little Rock Monday morning when my mom called to tell me Ben & Ashley were at the hospital. I started praying then that Ashley wouldn’t labor long before Nora either decided to come or the doctor decided to go ahead with the c-section. God definitely answered that prayer! Not only did Ashley not labor long, but Nora was born while Doug and I were still in town. So, I got to get my hands on my very newborn niece, Nora Noelle! 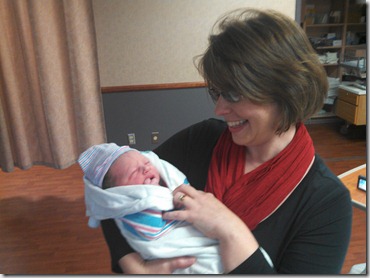 Herding Grasshoppers said…
Double congratulations on your niece AND your anniversary! What a great week!

Choate Family said…
You guys make the perfect couple!
What a beautiful example for the newlyweds :-)
December 22, 2012 at 9:40 AM