In the great outdoors...snow! Most of Arkansas saw Christmas snow for the first time in about 80 years! Ours didn’t start until 8:30 last night, so we didn’t see much of it. But it still was technically a white Christmas. We woke up to 1-2 inches (I think more fell – the wind was just so strong it didn’t stay around!), but most places that saw snow got anywhere from six to eighteen inches. Nice! We went out for about five minutes, but the wind was just too bitter. We threw a few snowballs and came right back in. Our southern clothing just doesn’t handle 20 degree sustained winds well!

Within our four walls...a great need for normalcy. We have some cleaning to do, some catching up to do, and some re-establishment of routine to take care of.

A heart of thanksgiving...for electricity and the fact that it did not go out during the storm.

A heart of prayer...for those who still don’t have power, including my parents and my brother and sister-in-law (Abigail & Nora’s parents). Also for a mission team that left for Russia today, including our friend Jonathan from church. Praying for his wife Rachel and their three children while he’s gone.

Random observations...I’m in that “time to get back to routine but not really sure where to start” mode. So, I started here. The most fun, I would say!

In other news, I’m being bombarded with mini-marshmallows. Steven made Doug a marshmallow gun for Christmas. Oh my goodness! That thing is so much fun!

My silly children...all got winter outerwear for Christmas. Olivia has several camo items, including a scarf and hat set from Angie and a cape and hat set from Doug’s mom. Angie has a pink cape and hat set, and Steven has a vest. All three kids have been wearing these things around the house. Oh, Doug and I also got them bows and arrows. I made camo quivers for their arrows, and they have been wearing their quivers in addition to everything else.

Thoughts from the kitchen...well, we thought we’d use my new dutch oven to make a pot of vegetable soup. And we thought we’d be fun and put it in the fireplace. We decided to play our new game (Settlers of Catan) while the soup was cooking. Then we got caught up in the game. Then more time passed than we realized. You can see where this is going, I’m sure! Fortunately, we had frozen some soup that we were able to thaw and reheat quickly. Live and learn.

On my bookshelf...a whole slew of books waiting for review in the coming couple of months. My review calendar for 2013 is already filling up! Number one on the list is Love Finds You in Glacier Bay, Alaska by Tricia Goyer and Ocieanna Fleiss, scheduled for a January 1 release. I love being a reviewer and getting early peeks!

Projects...Get the library bookshelves back in decent order after our pre-Christmas reorganization binge so we’ll be ready for school to start. Oh, and I guess I have to get lesson plans ready, too!

Sounds of the moment...the puff of the marshmallow gun; the shrieks of children as they are hit with marshmallows; the clicking of the ceiling fan and the blowing of the heater. I’d rather be in front of the fire. I think it would be neat to have one of those internal fireplaces stationed between the living room and the library so I could work in here but still be in front of the fire.

Last week we learned...just how much easier it is to make doll clothes from our new pattern book than to make up the patterns as we go along. They turned out so cute! I hope to get pictures posted in the next day or two.

A favorite thing from last week…watching Olivia do so much of her sewing on her own. She’s learned a lot! Also, getting through the madness without any major explosions! It was the smoothest gift-making season ever, I think!

The planner...Mom and Dad were supposed to be here today and tomorrow, but snowzilla changed that. So, they’ll come another time. Meanwhile, we’ll spend today, tomorrow, and Friday working on getting life back in order. Then on Saturday the Choates are coming to spend the night before heading back to Texas (weather permitting, of course). YAY!

Because visuals are fun...the kids really got lumps of coal in their stockings! Okay, so these weren’t exactly made of coal. Maybe they were made of chocolate. 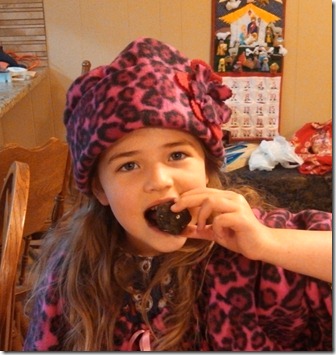 Herding Grasshoppers said…
Sure sounds fun around your house... and SNOW! We got some 'chunky rain' on Christmas day, but nothing much.

Love the lump of "coal"!

learningtable said…
I'm a little jealous of your snow--sure wish we'd get some at least once! I've been doing a schoolroom purge too. A pending new year just makes me want to organize. :)Anne
December 30, 2012 at 11:24 PM