In the great outdoors...cloudy and a little rainy. Fortunately, it’s a bright kind of cloudy. The sun would still be nice, but it’s not overwhelmingly gloomy. Always helpful for a Monday to not be gloomy.

Within our four walls...there apparently is a new Tinker Toy creation factory. I have not yet seen it. I’m not sure I want to. All I know is that it came out between chore time and school time this morning because my precious children did not have this week’s checklists yet and therefore could not start school. In that short time, they managed to cover Angela’s room so abundantly with Tinker Toy creations that she had to do her school work in Olivia’s room.

(Later…I actually braved it and it wasn’t too bad! Here Angie is trying to invent a Tinker Toy loom.) 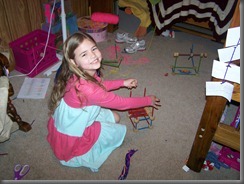 A heart of thanksgiving...for an upcoming school break. I think the whole reason I still school year round is because I know it means we can take a week off every six weeks!

A heart of prayer...with Scripture. For the past week or so the reminder to use God’s Word in prayer has been overwhelming. Last night I even “happened” to run across a old notebook of mine full of verses I’d picked out to pray over different people.

My silly children...are taking sides regarding a future trip of Bunny, Olivia’s beloved gray rabbit. Doug will be taking a trip to Israel in the near future, and he insists that Bunny will be accompanying him. Olivia emphatically disagrees. Angela and Steven waffle back and forth. This drawing appeared on a fridge dry erase magnet recently, indicating Angela’s current position on the issue. Just in case it’s not clear, it reads, “Bunny can see the world!” The stick figure at the bottom is Doug holding a camera so as to record Bunny’s world traveling adventures. 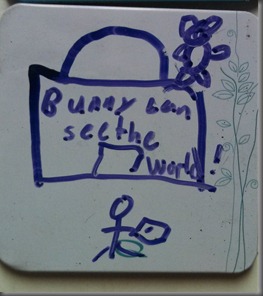 Thoughts from the kitchen...ribs, a gift from a friend. They were yummy!

On my bookshelf...Against the Tide, my most recent fiction read. I am completely caught up on kids’ readers. In fact, I’m good for the week on Steven and Olivia’s readers, and just have a couple of chapters to be ahead on Angela’s. YAY! So, I get to read the novel and continue perusing WordPress for Dummies.

Sounds of the moment...kids playing happily in Angie’s room.

We are learning...that nothing has to be done perfectly the first time. Sweet Angie has always flown through school, but math is starting to slow her down a bit. She’s learning that it’s okay to have to work at it a bit, and that it’s even okay to miss problems for the first few days, as long as we know she’s getting the hang of it as the days go by.

A favorite thing from last week...being reminded that it’s okay to be scared, nervous, or overwhelmed as long as it does not stop you from doing what you should.

The planner...school, church, art class, another trip to Little Rock on Friday for a retirement party, and an associational prayer event at our church on Saturday.

Because visuals are fun...Latin time! We’re not one of those “have to learn Latin or you’re not educating your family” kind of families. We just do it because the kids really do enjoy it. In fact Steven LOVES it! And I love that English grammar will be so much easier to teach him in the next couple of years! 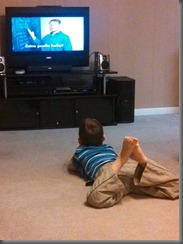 The Hibbard Family said…
Plan for the next six weeks, work on writing projects, and attend a social media workshop!
February 6, 2013 at 11:18 AM