In the great outdoors...another gloomy Monday with storms forecast. What is it about rain and Mondays? The storms aren’t expected to be anything nasty. Just noisy and windy with the possibility of hail. There will probably be a tornado watch, but we practically live under a tornado watch this time of year.

Speaking of weather, last week while many in Arkansas got snow and ice, we had hail, just a little larger than pea-sized. 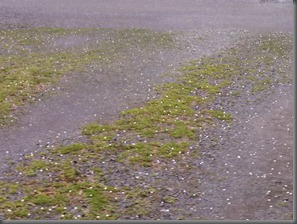 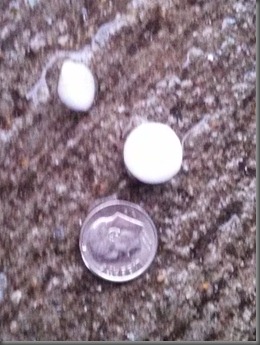 Within our four walls...some clutter that needs to be tackled. But, I just had a moment of encouragement. I was about to take a picture of the disaster on my desk and the table beside it. But when I looked, I realized just how much of it I’d already managed to tame! I know this still looks cluttered, but it is nothing compared to what it was a little while ago. That makes me smile. 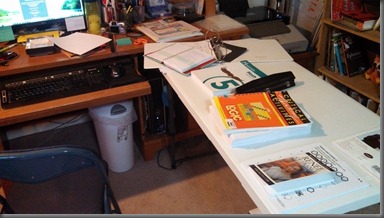 A heart of thanksgiving...for prayer warriors.

For the text I just received about a brand new sister in Christ.

And for preparation. During our years in ministry, God has allowed me to watch several girls mature through the 9-13 age range. I’m sure boys are the same way, but it is downright amazing how much girls change in those few years! It’s still crazy to watch my own baby girl grow up so quickly, but I’m so thankful that it’s not sneaking up on me. I’m thankful for the way God has warned me. And I’m thankful for the precious girls who allowed me into their lives during those crazy years of their lives.

A heart of prayer...for my almost-92-year-old grandpa recovering from “minor” surgery (if anything can be considered minor at that age).

For the preemie I mentioned last week – today’s been a bad day.

For some of my prayer warriors in their needs, for some who haven’t yet learned to be warriors themselves, and for others who have no relationship with the God who hungers to satisfy their every longing.

Random observations...if you have ever doubted the need to be very careful what you say, whether in person or online, I’ve got a story that will solidify that truth. Doug’s father’s boss saw a Louisiana news program last week that included a quote from Doug! A couple of people from our church heard it from an Arkansas news channel over the weekend. No one remembers exactly what he was quoted as saying, and Doug himself has no idea. His words were snatched from somewhere, and no one asked him for the quote. Everyone who heard it agreed that it was not a quote to worry about, thankfully. Fortunately, my husband has learned to be very, very careful with his words. Wise man.

Thoughts from the kitchen...I love having a hubby who doesn’t just reheat leftovers. He creates a whole new meal with them. He can do that with almost anything! Today, he whipped up some chicken fried rice. The only fresh ingredient was the egg...oh, and the sauce. And it was yummy! Much better than just plain ole rice and chicken would have been.

On my bookshelf...hmmmm…It looks like the review novel I was supposed to read this week hasn’t arrived, and the reviews I schedule in its place are picture books. And next week I have two Bible study reviews. Oooh…two weeks before I need to read again for review. I wonder if I can squeeze a just for fun book into my week? Maybe…

Sounds of the moment...the kids playing together. The beginnings of distant thunder.

Last week we learned...that “off” weeks are busier than school weeks. It seems unavoidable.

A favorite thing from last week...taking a sick day on Thursday. I know that sounds awful. I never want my babies to be sick, I really don’t. But, Olivia was just under the weather enough to stay home from art class. All three kiddos were snotty and low-key. It was a nice, calm, quiet, movie-watching kind of day. And I got a few things done I didn’t expect to accomplish ‘til Saturday, which made the weekend much more relaxed. Yes, sometimes sick days are a blessing.

The planner...not much out of the ordinary this week, although I’ll probably be joining Doug working at a food pantry on Thursday. Then this weekend my brother and his family will be coming so he can preach Sunday morning. I get to love on my nieces and hear my brother preach his first sermon! Hopefully Mom and Dad will get to come too!

Because visuals are fun...’Armless Steven!

Steven and Doug went to a hunter’s feast last Friday night, and Steven won a vest as a door prize. It’s just a “little” big, but he loves it! He wore it the other day while walking up to the church with Doug, but it was chillier outside than he’d expected. So, he pulled his arms in. Doug called him “armless Steven.” 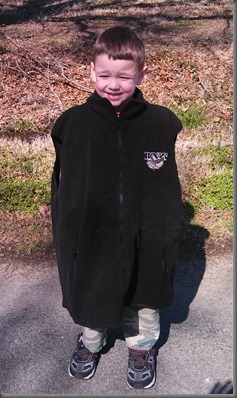 I so enjoy these peaks into your daily life :D It IS amazing, watching our kids grow, right before our eyes.