In the great outdoors...much-needed sunshine! And a heavily laden peach tree right outside my window. We picked the first peaches yesterday – small, but yummy. 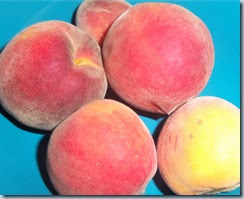 Four branches have broken, taking with them more than half of that tree’s crop. But, we know better how to prune it now to help it withstand our prairie winds next year.

The other peach tree, however, is perfect! Those peaches will be ripe next month. I like the staggered harvest.

Within our four walls...much excitement. Today we will finally get to go swimming for the first time. Either schedule or weather has delayed us thus far.

A heart of thanksgiving...for the sunshine, the lack of oppressive heat thus far, and a much more productive week than we had last week.

A heart of prayer...for rain for the Choates, protection of crops from the deer, church members having and recovering from surgery, and the children of our community. My heart aches sometimes over that last one as I see children whose parents have seemingly no regard for their well-being.

Random observations...were I to write down all of the random thoughts that flow through my mind every day, I could write a book. A long book. A very disjointed book. Yet, when I sit down to recall one of them, they all disappear. That shows just how unimportant they really are. And it reminds me of the need to discipline my thoughts.

My silly children...have been quite creative with their summer thus far. I was going to put a picture here to show you their focus of late, but I discovered that I actually took several pictures! So, I will just share in a separate blog post. I need to get back in that habit anyway!

Thoughts from the kitchen...we have a menu plan through July! Oh what a difference that makes! My days – and the grocery budget – run so much more smoothly when there is a plan. Today it will be turkey bacon quiche, Angela’s favorite.

On my bookshelf...fiction I want to read; non-fiction I need to read. I did just establish a summer schedule with reading time set aside. Will it happen?

Sounds of the moment...Olivia practicing piano and Steven’s flip-flops clapping as he walks through the house returning trash cans to their appropriate locations.

From Hibbard Academy...not much. We haven’t started the summer things we intended to do. But that’s okay. I don’t mind. We’re having a good summer.

A favorite thing from last week...the end. Is that bad of me? Last week was one of those weeks that just needed to come to an end. Nothing major went badly, but there were plenty of little things that caused frustration and exhaustion throughout the week.

The planner...normalcy. I like that. And a birthday party Saturday night.

Because visuals are fun...I’m not sure the bunny under the arm really helps ensure proper positioning when practicing. 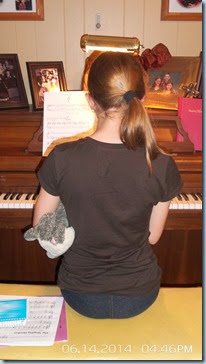