In the great outdoors...mosquitoes. Lots and lots of mosquitoes. Everything else is secondary. If you don’t care to see what I mean, just skip right on past all of this. I just feel like talking about our mosquitoes for a minute!

This is what our bug light looks like most mornings, just from one little area in the carport where the church van is parked (we only turn it on at night). The smallest of those black clumps holds about a dozen mosquitoes. This morning, it was solid black. 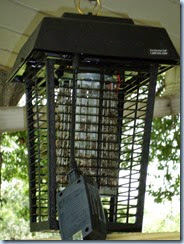 Oh, and that doesn’t count all of the bugs that end up falling on (this picture is just a small sample) either side or on the top of the fence. 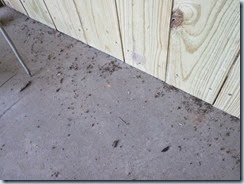 Because we have four high-powered fans running non-stop in the garage, we’re mostly mosquito free there now. The light above allows us to get to the church van and reduces the population in the opposite corner (around the lawn mower) from a couple of thousand to several hundred.

Next problem – figuring out how to reduce the population that hovers around the front and back doors, currently preventing their use.

Within our four walls...Legos, I do believe. The kids are preparing a battle reenaction for Independence Day.

A heart of thanksgiving...for the rain we’ve received lately; for a well-sealed house; for plenty of groceries; for new planners; 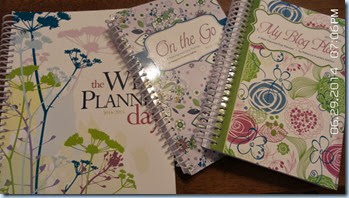 for an incredible job with an amazing company; for a husband whose wisdom is recognized by others; for healthy children; for a well-sealed house (have I mentioned that before?); for God’s continual provision in amazing ways; for a vehicle, bought used, that we have owned for eleven years and is still running even though we just passed 225,000 miles.

A heart of prayer...for wisdom; for friends struggling with decisions; for friends grieving over the loss of their precious daughter after an extended cancer battle; for an upcoming month of transition; for a good balance of rain and sunshine to bless our farmers and the Choates; for wisdom about when we need to replace the aforementioned vehicle.

Random observations...I wonder how long I can stretch out working on this post. I’m procrastinating. The next task is clearing my inbox. I’m scared. Very, very scared!

My silly children...have assigned names to all of their Lego people. They come from a wide range of influences such as Tolkein, Lewis, Star Wars, Firefly (no, they have not seen Firefly – they just know about some of the characters), the Lego Movie, Doctor Who, Frozen. Meanwhile, there are multiple other creative names from their own imaginations. I think they might have too many Lego people.

Thoughts from the kitchen...Doug’s cooking today! That makes me happy. I think we’re having chicken & waffles, a southern meal I never quite understood until we finally gave it a try recently. It really is quite the tasty combination!

On my bookshelf...chaos. Lots and lots of chaos. That will be tackled this week.

Projects...besides the same old sewing projects, we are going to tackle some pre-new-school-year organization and rearrangement. It’s time to try to tame the chaos that is the library/school room/sewing room/Doug and Ann office, and the best way to do that is to consider why the current arrangement isn’t working. (What? You don’t think I’m looking for an excuse to rearrange, do you?) Meanwhile, we’re contemplating new bookshelves.

From Hibbard Academy...new books and supplies rolling in! One book order and the Sonlight order arrived last week. Today we got the Lightning Literature order, and Math-U-See should arrive this afternoon.

A favorite thing from last week...attending the closing presentation at Joy Works, the camp Angela attended last week. It simply amazed me what they were able to teach 4th-6th graders in three days!

Because visuals are fun...a shot from JoyWorks (arrow pointing to Angie) 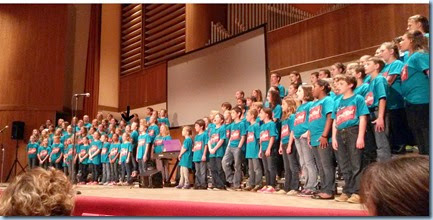