Back to School Prep

Warning: Long post for those nerdy people like me who love reorganizing and talking homeschool. This is one of those posts that is more about my ability to record where we are right now than one for reading pleasure. You’ve been warned. You proceed at your own risk!

Usually this time of year, we’re looking at what we’re going to do to celebrate NOT Back to School. We continue working through the summer on our six weeks on, one week off schedule.

This year, Mama needed a break. And the kids benefitted from one as well. We ended up with more of a break than we’d planned, but it has been such a full summer! So, it has been worth it.

Now, though, it’s time to gear back up for a new year.

First, we had to tackle “the room.” It wasn’t quite this chaotic when we got started on the reorganization, but it was close. 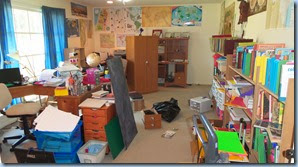 This room was trying to accomplish more than the last rearrange intended. That meant not everything had a place. That meant 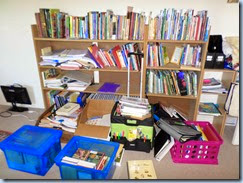 chaos. By the time this picture was taken, a bookshelf or two had already been moved, a cabinet was in the process of moving, and various  items had found their way to the floor.

Most rearranges have a definite end point. This one has included too many factors: moving furniture, sorting through accumulated junk, 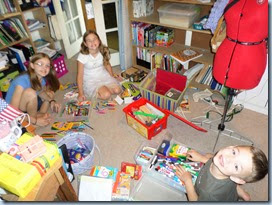 restructuring work zones for Doug and me, rearranging the sewing

corner, sorting through school stuff to see what needed to stay and what needed to go, moving out last year’s school materials, and moving in this year’s. A task that was started three weeks ago is still in progress. But, it looks a lot better than that first picture. In fact, it even looks better than this: 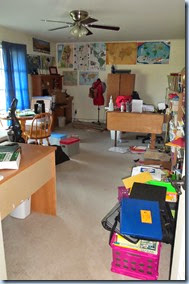 Now I’m into the final prep stages for school.

This year we are changing the way we view grades. I want a little more flexibility with Angie and Steven. So, Angie is in middle school and Steven in elementary. No grades. We’ve always been loose, but this will allow us to be even more flexible. Doug and I decided that they can consider themselves (for social purposes, mainly) to be in seventh grade the year they turn thirteen. This won’t really change the academics they are pursing, but it will eliminate any concept of being ahead or behind on anything. Olivia’s work is a little more defined, and she’ll definitely be entering eighth grade.

We will be using Sonlight cores H (2nd half of world history -Olivia), F (a fascinating, but challenging, look at the Eastern Hemisphere - Angela), and D (first year of American history - Steven) for history. 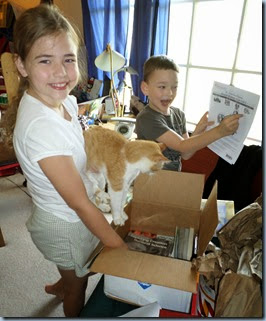 They will be extremely varied topically, but the girls are growing so much more independent that I think we will be able to pull it off. 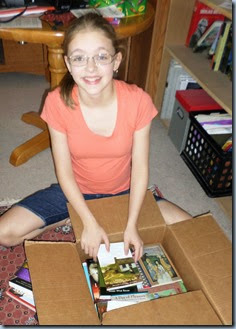 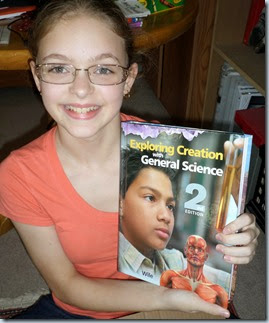 Angela will still be doing Sonlight science this year, studying the human body. But, I’ve moved all of the Core D science books to the “for fun” shelf. I’ll be using Dr. Wile’s brand new elementary series for Steven instead, continuing with Science in the Beginning. We started this as a supplement last year, but I like it so much that we’re just switching to it completely this year.

Language Arts is A Beka for the younger two, but we’re trying something new for Olivia – Lightning Literature.

When I entered high school, Mom switched me to the University of Nebraska’s Independent Study High School program. It had an incredible writing program worked into the literature courses for ninth through twelfth grade. I wanted my children to have the same opportunity, but I wasn’t sure how to deal with the expense of enrolling them in the UNL program for that one course.

Enter Lightning Literature. After rave reviews from fellow homeschoolers I trust explicitly (thank you, HEDUA, for a great homeschool community!), I decided to take the plunge. Solid writing training at a fraction of the cost. I’m so excited! I’ll let you know what I think after we’ve worked through a year.

Of course, all three will continue to do Wordly Wise. Such an easy vocabulary program to incorporate into any curriculum! 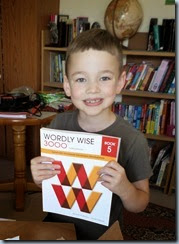 For math, Angie and Steven will continue with Horizons while Olivia will switch to Math-U-See for algebra.

We’re still feeling out Bible resources. We’ll do some form of missions emphasis during our morning prayer time, including the book Seed Sowers, by Wycliffe Associate Gwen Toliver. I have not yet found a book by author Starr Meade that I dislike, and we have Grandpa’s Box and the God’s Mighty Acts books on our shelf. So, I’m sure they’ll work their way into our Bible resources.

Last year I worked quickly through Truth Quest History: Beginnings for a review, but Olivia and I are processing through it much more slowly together. I don’t always agree with the author’s perspective, but I absolutely love the way this book has made Olivia think! We started using it as a history supplement, since Olivia was doing ancient history last year. But, we ended up slowing down and using it for Bible instead. We will probably continue that this year. I love watching Olivia’s mind process spiritual things. We have had some incredible conversations while processing through this book!

Time is tight in our school day, balancing a never-consistent schedule and making sure that I can switch from school to my job as Senior Editor for HEDUA. But, we are growing in our ability to pursue independent interests, and that helps a lot!

All three children will work on piano and a language. Olivia has chosen German as her high school language pursuit. We were very blessed financially to be able to work Rosetta Stone’s homeschool German program into our budget this year, thanks to reduced costs on books and a HUGE Rosetta Stone sale. Love it! Meanwhile, the younger two will continue with Polish until they reach eighth grade. Then they will each being pursuing their high school interests. As of right now, Angela wants to learn Arabic, and Steven is interested in Italian.

They will also all three work on piano. Olivia really wants to learn. Angela and Steven will be learning primarily as an avenue for music theory. Even if they never pursue an instrument, I want them all to know the language! Olivia is also beginning guitar, and we are praying about violin in the future.

And that’s it! Whew! Now to bring it all together in a workable schedule and make sure everything is organized for August 11, our first day of school.

I better get busy!

Herding Grasshoppers said…
I LOVE these posts - seeing what others are doing :D Gunnar is going to start the Wile science series as well, though he's a bit younger. We may spread the first two books over three years... we'll see. And we're also doing the second year of Sonlight's World History (Gunnar and I) so we'll be reading many of the same books - fun!

The Hibbard Family said…
Julie, I love being in sync with you on books! Can't wait to hear your opinion as we go along. :-)