In the great outdoors...fall!! Okay, so it’s still a bit warm. But, that’s okay. It’s still in the air. And that makes me happy.

Within our four walls...Piano Guys. I love their music! We’re all just soaking it up as we process through the morning.

A heart of thanksgiving...for music – what a marvelous creation! For a routine week. For a day of sunshine rather than the expected rain – hopefully it will help the farmers get that much closer to done.

A heart of prayer...for writing projects Doug and I have before us; for the farmers; for so many friends in need of prayer

Random observations...notice the date on this. 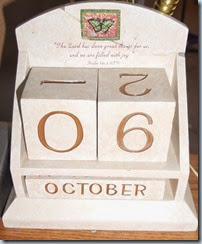 Yes, it’s yesterday. I changed it right after I snapped this picture. The funny thing is that I think I change it every day. I really think I do. But some days I look at it and it’s showing that five days have passed since I last updated it. How does that happen? I really think we’re skipping days. That’s the only logical solution, right? In fact, that’s the only reason it’s October instead of August. Yes, I made that mistake on Facebook, stating that something was happening on August 18 instead of October 18. *sigh*

My silly children...have fun doing the most ordinary things. I love it! Angie and Steven are sorting Box Tops right now to see if we have enough to mail in. And they’re having fun doing it. 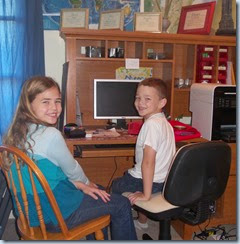 Thoughts from the kitchen...ham and potato casserole. It used to be one of our favorite dishes, but we haven’t had it in forever. Nice to pull out old favorites and have them feel fresh again.

On my bookshelf...I feel like a broken record because I have not been diligent to make time to read in so long. I really want to work that back into my schedule.

From Hibbard Academy...tweaking the schedule a bit this week. I can’t believe this is the first time we’ve had to do this! We usually have to make a lot of adjustments within the first couple of weeks, but this one has really worked! Now that we’re solidly into the school year, though, we’re finding that a few things are falling through the cracks because of time pressures. So, we’re going to make a few changes to see if we can relieve some of that pressure.

A favorite thing from last week...a nice family trip. Just us. Not associated with anything obligatory. Not tagged before or at the end of a ministry trip. Just a chance to be away as a family. We needed that!

The planner...routine. Not normalcy, because routine is not normal this time of the year. But definitely routine. Nice!

Because visuals are fun...some of Angie’s school work is quite challenging this year. Smokey understands this and wants to make sure she is available to offer all the help she possibly can. Help. Yep. That’s what it is. Right? 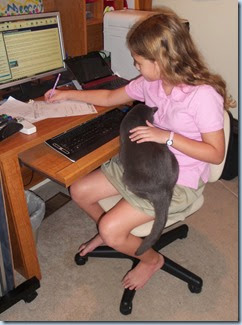