In the great outdoors...a rather blustery day, but the wind has blown the clouds away. Nice, clear, blue sky! It appears that the storm line passed us by, but we’re praying as the sun beats down on the further formation of the line on its westward journey.

Within our four walls...a great desire for naps. Last week was a busy one with quite a few late nights. And we all do love our sleep! So, we’re trying to catch up a bit this week.

A heart of thanksgiving...for my growing children who are learning such wisdom. They humble me. I love to see them grow!

A heart of prayer...for our church as we determine to focus on prayerful obedience to Christ above all; for friendships to grow and blossom; for the Choates (who arrived safely in Honiara) as they prepare to quickly roll into a conference time before traveling on to the village.

My silly daughter...was trying to define the Coriolis Effect for a science test. Part of the answer involved “sea currents.” As we were getting ready to grade the test, she glanced at her paper and just cracked up, saying, “I don’t know WHAT I was thinking.”

To say we got a good laugh would be an understatement!

Thoughts from the kitchen...it’s Ground Hog Day. So, we have to have ground hog for lunch, right?

On my bookshelf...Risen, Angela Hunt’s novelization of the upcoming movie, arrived for review a couple of days ago. It’s a storyline that intrigues our whole family. So, we’re looking forward to the novel.

Projects...writing projects are the biggest thing in front of me right now. But, I am making progress on the temperature blanket! I love the different textures created by slipping stitches different ways. 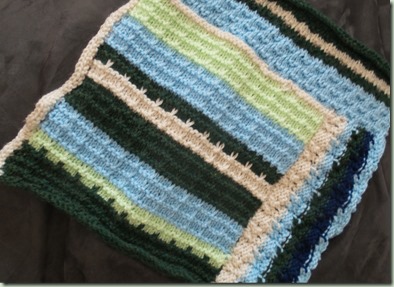 The large square was first. It will be in the center of this panel when it’s done. Every six rows marks a day. You can get a feel for each day by looking at the dark green (45-54°) at the bottom with the lighter green (55-64°) coming next and the light blue (33-44°) above that. The light green was one day, so it was surrounded by two days each of the other temperature ranges.

The panel (or log, as it’s called in the pattern) on the right was next, and a day is marked by four rows. Each row was one day. Finally, the top log brings us up to last Wednesday (I’m a little behind – but it’s easy to catch up, actually; I usually do a few days at a time.). Again, four rows per day. We had quite a few “light blue” days in a row. By the time I get caught up to today, we’ll have a good bit of the creme color (65-74°), as the past four or five days have been more like April than January.

Sounds of the moment...We did have piano music in the background, but it’s gone now. Apparently practice time ended. Now, it’s just the tapping of my keyboard and Olivia’s. And, I think the dryer is running.

From Hibbard Academy...Angie and Steven are almost done with their cores! Great excitement! Just wrapping up a couple of final books. Steven will then launch into his next core by diving immediately into the Civil War. Angie will start a two-core stretch of world history. Olivia, meanwhile, is moving along so faithfully. I’m so proud of the way she’s tackled her freshman year!

A favorite thing from last week...under normal circumstances, two things would have topped the charts: seeing the Skit Guys at the Evangelism Conference, then going to see Tim Hawkins as a family Thursday night. Oh, how we laughed!!! I thought Steven wasn’t going to survive the laughter! 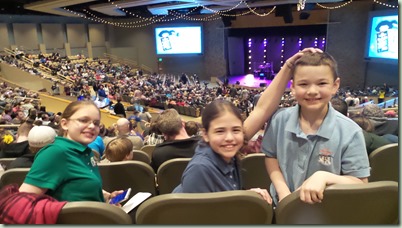 But, the real joy was one last visit with the Choates. This was our “excuse” to go: we get to provide a home for their piano while they’re gone! 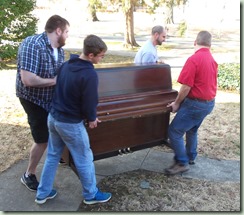 We were supposed to get it the Thursday before, then possibly the Saturday before. But, our delightful snow interrupted those plans. But that just meant we got to go Saturday for the fun of it and again Wednesday for one last goodbye.

I hope this week to post the rest of the pictures from those last visits!

The planner...a mostly normal week, for which we are thankful. Our evenings are full with this and that, but the days are a little more routine – until I head off to a project-related writer’s conference on Friday. The kids are so excited because it’s at the Baptist Building. When we lived in Almyra, we’d frequently relocate school whenever Doug or I had a meeting. Since we’ve moved, though, we’re so close that we don’t have to combine meeting trips with our other Little Rock errands. The kids have gone through withdrawals! So, even though I could just go alone and leave the kids home with Doug, they begged to go with me.

Because visuals are fun...the piano’s home for the next year or so. What an answer to prayer! The kids can’t get enough of playing it! 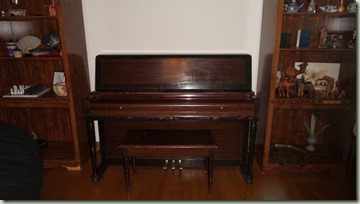 Herding Grasshoppers said…
Hurray for the piano! And I'm glad to hear the Choates have arrived safely :D
You're so funny, Ann - I'm glad you gave me the idea to use ground meat for Groundhog Day! I'll have to write it down for next year, though, as Kerry and I are going OUT tonight!
Gunnar was just doing the Coriolis Effect too... Apologia Science, maybe?
Oh my word, you got to see Tim Hawkins?! My boys think he's the bomb. (Fire Ants!)
Julie
February 2, 2016 at 3:18 PM