In the great outdoors...clear skies and chilly temperatures. It’s turning into a rather mild winter after all (highs in the 50’s and lows in the 30’s, on average, with a few swings up or down), but there’s still that wintery tinge. That sharpness that hints at true cold even on a 50-degree day. I’m not sure how else to describe it, especially in light of my friends who experience true cold in the winter. But, the cold feeling is still there, and I love it!

Within our four walls...allergies. A few inexplicable tears. That sort of thing. We all slept in this morning. Just one of those days.

A heart of thanksgiving...for friends. I know I say that a lot, but I don’t take them for granted. True friends are a safe place. They renew and reenergize. I’m so thankful.

A heart of prayer...for our bodies to get used to the change in allergens, and for a wide variety of other prayer needs.

Random observations...I need a few days to just sit and write. To get a stockpile gathered of all the thoughts rambling around in my head. To get ahead so I’m not right on top of my deadline (whether personal or set for me by work or other sources). Maybe this summer that will happen. I don’t want Olivia to have to do school work too far into the summer (and she doesn’t want to either), so we’re trying to push through to get done. But she, Doug, and I would all three love a writing week, I’m sure!

My silly children...are so very different! It’s such fun to see their personalities develop.

Thoughts from the kitchen...pasta e fagioli today. Soup is not quite as exciting this month as it was last month, but we still seem to be enjoying it. We have about two weeks to begin brainstorming great ideas for next month.

On my bookshelf...same as it has been – still need to reestablish that reading habit.

Projects...writing, and I have a few sewing projects I need to get laid out. The temperature blanket is coming along, but right now I’m on the first log I don’t enjoy. It looks nice, but it’s a pill to knit, so I’ve progressed through it rather slowly, even having to remove 16-20 rows of stitching and start over at one point. Almost done with it, though. Hopefully the next one will be better.

Sounds of the moment...Olivia trying to progress through the speaking portion of her German lesson. I really, really like Rosetta Stone, but there are two areas that frustrate me. One is grammar, especially in a tough language like German. It’s hard to figure it out from context. The second is the speaking lessons. I don’t know if it’s our microphones (we’ve tried several) or the software, but it’s almost impossible to get above 50-60% on those speaking lessons.

From Hibbard Academy...independent school day today so I can get Angie’s new core prepped for next week. Steven and I decided to spend one more week finishing up his core before switching to a new one. That means I can just focus on prepping Angie’s this week and can prep his next week. Works for me!

Angie, however, is convinced that one book contains all her educational needs. 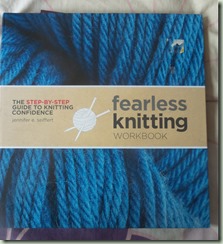 She’s been wanting to learn cable knitting. I’ve had this book for a couple of years, and I knew it had a chapter on cable knitting. When I handed it to her yesterday, I had to add the instruction to finish her school work first. She responded with, “But this is a workbook and has chapters with assignments and even extra credit! So it’s school work, right?” Add in her cute little grin and batting eyes, and she can be quite convincing. Besides, it requires math. What more do you need?

A favorite thing from last week...Saturday. A family day, mostly at home. We needed that!

The planner...well, the week is mostly over, so most of the plans are behind us. Saturday will be full, but good I’m sure, with the fellas going to a men’s breakfast in the morning and us gals going to an AHG service project in the afternoon. Then we’ll meet a church family for dinner that evening.

Because visuals are fun...Angie’s latest knitting project, made for a girl at church. I think she’s working on a sheep dog for Steven now. I have a feeling we’ll need to buy another big box of stuffing pretty soon. 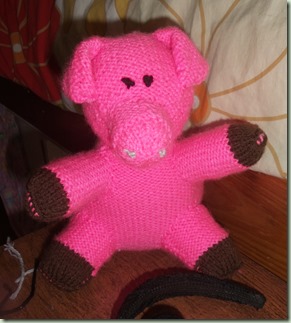