Observations about Today…Wednesday, July 31, 2019
The end of July? Really? There are so many ways in which that just seems off. Like the year has flown to quickly but has also dragged on and on. Like it shouldn't be 2019 yet 2021 should be next year. Time for me is just way off. Of course, that could be partially because I work in school years and in planner design. Thankful for the calendar on the wall and the planner on my desk that remind me of today in the midst of all of the things that force my mind to fixate on other days!

An Observation about the Week
It's week three of our stretch of routine, and it's finally starting to feel normal again. In a temporary sort of way, though, knowing that our more permanent reality won't be official until the middle of August.

A General Observation
I am such a structured person that, in the past, I have had in my head that certain blog posts HAD to go on certain days. I'm trying to break that mentality. Like with this particular post. If I missed Monday or Tuesday or whatever random day it was supposed to go on, I just skipped that week, which eventually led to no longer publishing. Now I'm trying to be okay with just publishing when it gets written. Doing it anyway. On the one hand, it's not "me" to do it that way. On the other hand, it's freeing and a bit more motivating to do it that way. So, maybe it's more that "me" needs to learn a little more how to honor my personality and maintain boundaries and guides without turning them into walls.

Yeah, so that general observation might have turned a bit philosophical. So, let's just go back to the "gonna post when I get the chance" mentality and leave it at that!!

Something I Have Read or Heard
Quite a few things hit me this morning in my reading time. Here's just one of the quotes I marked:

Something on My Mind
We are a practical family, and our home reflects that. But, we're a family in need of beauty as well. Certain aspects of our home reflect that, but many times the practicality overwhelms. I'm pondering how to incorporate more practical beauty into our home.

Something I’m Thankful for
Pictures. The ability to record and preserve images. Such a treasure for spurring memories and sharing stories and prompting spontaneous smiles. And reminding us of people and things we're thankful for. 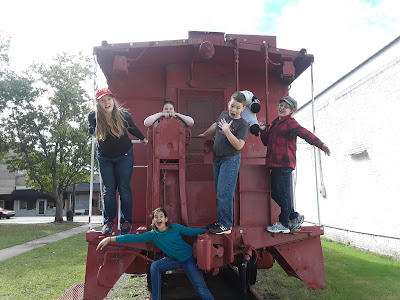 Something about My Kids
They are so much more well-read than I was at their age! Wow! As much as I loved books, I was very narrow in the books I chose to read when I was a teenager. But these kids really challenge themselves. And are conversant in what they read. They amaze me!

Something We're Working on
Purging! Our giveaway stack gets emptied and then immediately starts growing again. I'm thankful for what we have. But, we have too much. And the purging excites me! I think it is energizing for the rest of the family, too. I hope, anyway!

Something from Hibbard Academy
Down to one course--French for Angela! Well, and packing up or giving away last year's books and shelving this coming year's books. We start in just under three weeks, and I am feeling more relaxed about preparation than I ever have. It's nice, especially considering how chaotic the summer was until a couple of weeks ago and how behind I felt then.

Something That Makes Me Smile
The antics of our pets. Even though they make me crazy sometimes, they really are quite funny!

This is the "Where are my humans?" look that Monty gave Doug quite regularly the week the kids and I were at PraiseWorks. He wasn't too sure about Doug being the only human in the house all week! 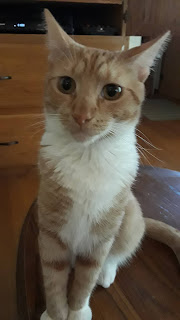