The Joys of Mundane

Some weeks are just busy, but tend to be mundane. And, to be honest, that can be such a nice thing! But, when you're not used to blogging about the mundane, it can make it difficult to record a day in the life! I have a lot of friends who blog using the Simple Woman's Daybook template for Mondays, and I think I just might have to join in with them to help me grow accustomed to writing about the every day.

But not today...(since it's not Monday!)

The kids go through dress-up phases. It's been a while since we've seen the dress-up stuff come out, but it did this week! One thing about having two girls followed by a boy is that there are a lot of things that we either were given or acquired in some other manner that are distinctly girlish that we have not replaced. Like sunglasses...I think maybe he needs a Lightning McQueen pair or something!!!! Strawberry Shortcake just doesn't quite do the trick! (Although he thought it was hilarious!) 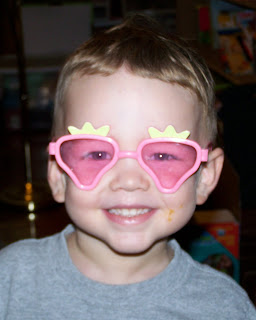 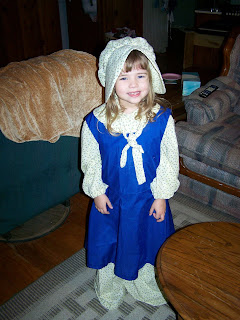 My girls love to match. You would think with hand-me-downs that it would never happen, but I can just imagine that God loves the relationship between my girls as much as I do because He always seems to provide things that reinforce this precious bond between then.

Last week my friend Mandy and I traded some clothes. In the bag of things that her daughter had outgrown was this polka-dot dress that, except for the addition of blue polka-dots to the green and pink, was almost identical to the Easter dress another friend bought for Olivia this year. Yes, they're spring dresses. Yes, it's after Labor Day. But, could you have even entertained the thought of telling these two sweethearts that a fashion guideline said they shouldn't wear these dresses to church on a Sunday in September? No, I didn't think so! :-) They were so excited to be matching! 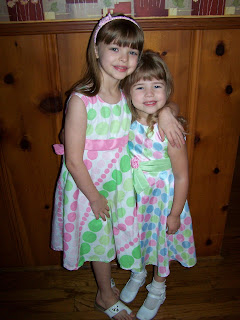 Sunday morning Doug was putting the final touches on the announcement slideshow for church, and Steven crawled in his lap to help. I just love my handsome men - I am so blessed!! 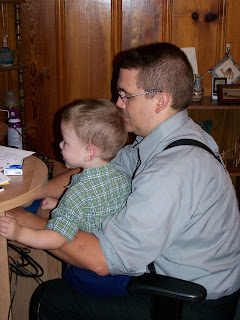 Choate Family said…
Normal, mundane weeks are great! We love to read about those kinds of weeks on your blog. My Olivia looked at the picture of your girls and said, "My, they've grown!"
September 25, 2009 at 4:53 PM

The Hibbard Family said…
Joanna, that's so precious!! You can tell Olivia that we all say the same thing about her and her brother and sisters! :-)
September 25, 2009 at 5:11 PM