Do you ever get it into your head that you’ve done something, but then find out you never really did – you just imagined it? (By the way, if your answer is “no,” I don’t want to know it. Just let me proceed with the comforting assumption that I’m not alone in this! Thanks!) Well, that’s how it is with me and blog posts. I could have sworn I wrote several posts, but they’re not up! So, I guess I never wrote them – and I guess I have some catching up to do!

We’ll start with the weekend before last. Doug’s parents had been on vacation and were returning home through Little Rock. They had also just celebrated their 30th anniversary. So, we met them and Stephannie and Morgan in North Little Rock at Olive Garden to celebrate with them. Mmmmmmm. 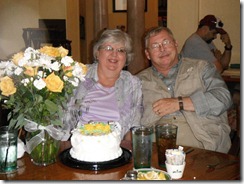 That was on Saturday. They spent the night there Saturday night and then came our way for church on Sunday. After church we got into that trunk of trains! 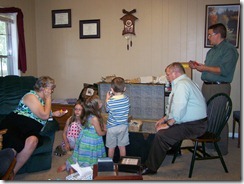 The trains themselves are great treasures! 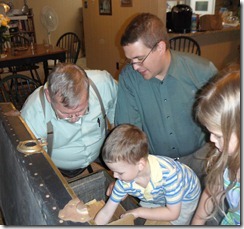 But, having PopPop there to tell everyone about them was even better. 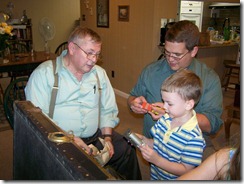 The girls liked the trains, but they were pretty fascinated with all of the “extras” at the other end of the trunk – the accessories that go around the tracks. 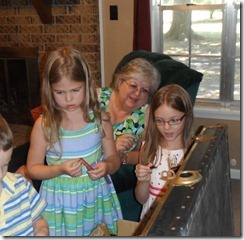 There’s still a lot of work to do to actually try to get the set running, but it was fun to go through it all with PopPop and Grandma.