If you ever feel like you’re lacking in the silliness department, come right on over. I’m sure we’ll have a touch of it to share. We usually do!

We’ll start with the youngest (the ones I have pictures for this time around). 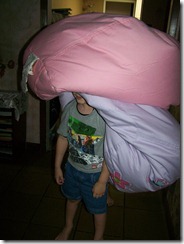 Here the little goofball decided that he wanted to carry his sisters’ bean bags around on his head. Don’t ask my why. I guess it just seemed like a good idea to him at the time. They wouldn’t stay on him very well, though, so getting them back up on his head every three or four steps did wear him out a bit. It didn’t last very long.

The bean bag incident came after Steven decided to “help” me with our read-aloud time. I was trying my hardest to finish our book when he grabbed a little hippo puppet and crawled onto the couch with me. The hippo then started to eat the book. Oh yes, it was SO easy to keep reading! And for his sisters to keep listening (amid their cackles)! 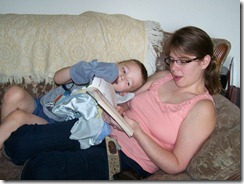 Then there’s Olivia. For some reason she has decided that secluded little cubbies are the best place to work. Closets have been one such location, which is not a problem. There are lights in all of the closets that have the space for her to work. No, the problem comes when she decides to build herself a little fort. She builds it either in the darkest corners of the house, or she puts on a “roof” that blocks out light. Then she goes in and tries to read or do school work. Grrr…

But, Angie took the cake today. The first one was pretty sweet. As I was finishing up my morning tasks before school, she was dressed in her little black tights and skirt. On her feet were knee-high toe socks which allowed her to skate around the foyer. She came in to me and informed me that she was running a skate camp. The purpose was to teach people about Jesus while teaching them to skate. She proceeded to tell me the things she read from the Bible while people were skating, as well as some of the training-oriented crafts she let the campers to do. So sweet!

But, that wasn’t the extent of her training. While I was grading her math from yesterday so we could look over it together, she was sitting on the floor with one of the cats. She looked up at me and said, so very matter of factly, “I’m trying to teach the Mina Cat to talk. She’s not listening to me.” My hoots of laughter did nothing to dissuade her in the least.

I love that life is never dull!