In the great outdoors...gloriously cool with bright sunshine.

Within our four walls...autumn decorations and open windows.

A heart of thanksgiving...for the cool weather, for a little found time this morning, for unclogged and pain-free ears.

A heart of prayer...for many needs among friends.

Random observations...my planner is not crammed this week. I really think that’s because I haven’t entered the tasks I need to do. I’m sure every day will be sufficiently full.

My silly children...were at full tilt yesterday! By lunchtime they had all finished school and were so full of energy. I informed them that they would be spending the afternoon outside. Not a problem for them! At 5:30 I went to ask them what they wanted for supper, and they proudly informed me that they not only had supper planned, but they were watching the time so they’d know when to come in, shower, prepare and eat their supper, and be ready for evening wind down. And that’s just what they did.

Thoughts from the kitchen...we had our first pot of stew this week, and the kids had oatmeal for breakfast this morning. Oh how I’ve been craving cool-weather food! Today’s menu is just a skillet beef and noodle dish, so nothing particularly fallish about it. But still good. Tonight there’s a fundraising fish fry in Stuttgart, and tomorrow we’ll have another fish fry at church. We’ll get our fill of catfish this week!

On my bookshelf...well…I haven’t been very diligent about reading lately. Must get back to that this week. I have several books waiting for me.

Projects...Christmas gifts. ‘Tis officially the season for those to be my sole focus!

Sounds of the moment...tapping keyboards. Angela is typing emails behind me.

A favorite thing from last week...reading Olivia’s book report. Remember how I mentioned last week that writing is laborious for Olivia? That has typically meant that reports and paragraphs require a massive amount of energy and revision. So, when Olivia told me on Monday that she was really struggling with knowing what to say in her book report, I expected a lot of work ahead of us. When she finished the rough draft on Tuesday, she told me she didn’t think it was very good. What I saw literally brought me to tears. It was almost perfect. I showed her where a few commas would be helpful. I pointed out two areas where she needed to work in verb tense continuity. And, I taught her how a present tense response to a book grabs attention better than past tense (I love ____ about this book, rather than I loved.). That was it. It was a beautiful, well-written, extremely expressive report. Yes, I was proud. I was equally proud when she presented a fantastic oral report yesterday.

The planner...my big weekly meeting day is behind me, although I still have one more meeting this afternoon. Doug will be taking Steven to his first night of Cub Scouts tonight! YAY! We’d hoped to start a pack here in town as a form of outreach, but we just couldn’t get it off the ground. So, they’re heading to Stuttgart. We’re very excited. We’ve been looking forward to this for a while! Meanwhile, we had also hoped to get an American Heritage Girls troop started, but it fell through as well. Fortunately, AHG allows families to be a troop when there is no established group around. So, we’re waiting for the girls’ kit to arrive so we can start that.

Back to the planner…Saturday we get to celebrate my parents’ 40th anniversary! The celebration will be a couple of weeks early, but we’re looking forward to it!

Because visuals are fun...Mary Ann usually does our puppet devotional/song intro to Sunday school every week, but she was gone on Sunday. Guess who she recruited to fill in this week? Olivia was as nervous as could be, but she did a FANTASTIC job! Once again – so proud of her and the young lady she’s becoming! 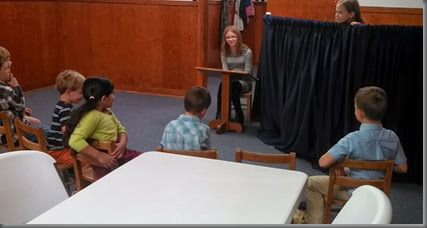