For Today...Tuesday, September 30, 2014
In the great outdoors...perhaps the last hurrah of summer. We’ll see.
Within our four walls...much sneezing and sniffling.
A heart of thanksgiving...that colds are the worst health problems we typically have to deal with; for my amazing husband; for the sunshine; for my incredible co-workers.
A heart of prayer...for everyone around us struggling with the fall colds and allergy mess that comes with harvest season; for friends dealing with work issues; for a precious friend facing a transition; for rain to refill the water tanks on Marulaon so the Choates can return to the village as planned.
Random observations...colds are annoying no matter what, but I think warm weather colds are especially so. Cozy sweatshirts, hot showers and beverages, and mugs of soup are my favorite comforts when I have a cold. But this warm weather makes them less than comforting. Yes, you can go ahead and throw stuff at me. I know I’m crazy.
My silly children...are all a little groggy today. We’ll see how school goes!
Thoughts from the kitchen...chicken pot pie. Next best thing to chicken noodle soup.
On my bookshelf...planners! And if they’re on my bookshelf, that means they aren’t on my desk anymore. And if they’re not on my desk anymore, that means the prep work for next year’s planners is almost done! There’s going to be some great stuff in HEDUA’s high school and college planners next school year. And I’ll actually have a high schooler who will use one! Exciting!
Projects...plotting and planning for Christmas. Shhhh…I can’t say what because I have a daughter who now reads some of these posts!
Sounds of the moment...I can’t hear much because of the congestion in my ears, but I think I do hear the children chattering in the background, a little music, and Doug turning pages of a review book he’s reading.
From Hibbard Academy...a short week this week. Steven just finished learning about Columbus in history and is learning about light in science. Angela just finished Australia in history, and I’ve gone blank on where she is in science. I know she was learning about memory, but she’s moved on from that. At least I remembered that she was learning about memory! Ha! Both of them are working on capitalization, and I think all three kids are dealing with fractions. Fun stuff. Olivia is very independent these days, so I have a hard time keeping up with where she’s going in science and history. She absolutely loves Dr. Wile’s Exploring Creation with General Science. It’s right up her alley! Together we’re reading Out of Many Waters and learning about the plight of the Jews during the Portuguese Inquisition. I never knew!
A favorite thing from last week...seeing all three kids stretched out on the floor around the radio listening to the Razorback game Saturday. It’s not so much that they were enjoying the game. It’s more that they were enjoying it around the radio. With all of our modern technology, we can easily lose our ability to listen. But, if you want to keep up with a football game on the radio, you have to listen…and remember what you’ve heard. They were having so much fun and were keeping up with it well. It was precious!
The planner...working our hardest to get everything essential done by the end of the day tomorrow. Then, an extended family weekend. I think the word “zoo” might be jotted down on the calendar. It’s been a while, and we’re excited!
Because visuals are fun...Steven received a whole stack of belt loops, stars, and pins at his Scout pack meeting last night! He was excited! 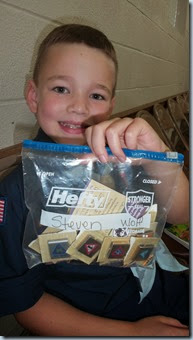 Herding Grasshoppers said…
Gunnar and I just read Out of Many Waters as well! Enjoyed that and The Iron Peacock :D And working through Exploring Creation with General Science - the one before Physical Science. I love the way he explains things. Whew!

The Hibbard Family said…
Haha - I just had to update the post because of your comment, Julie! :-) I realized I put physical science in there, and it was supposed to be general science. Oops!
October 4, 2014 at 10:31 PM