Making It Ours: The Girls’ Room

So, I’m finally getting the pictures of the girls’ room up! The goals when we moved in were twofold:

1) Consolidate two rooms into one while still allowing the girls to keep as much of their personal interests and belongins as possible (and working with the furniture we had!).

2) Keep as many of Angie’s books in her room as possible. The child has this dream of living in a room where the necessities like a bed and dresser just melt into the bookshelves somehow.

Wonderful Uncle Aaron helped the girls accomplish both goals quickly, getting them into a functional room by the end of our first day!

All furniture in, and sides of the room expressing the girls’ personalities… 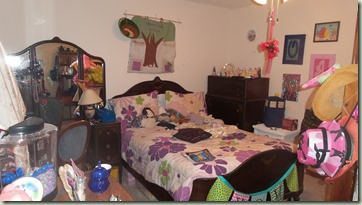 …and bookshelves tucked behind Angie’s bed – not super easy to access, but still almost all shelves were usable. 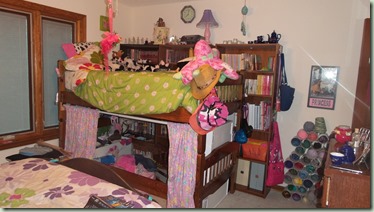 Looking at it at the time, we really didn’t think there was a way to get Olivia’s dresser more accessible than it was there beside her bed, the bookshelves exposed, and more floor space available.

But after six months of contemplating, we realized we were wrong!

Knowing there was not a lot of room for experimenting in the rearrangement process (nor a lot of time to mess with it), I told the girls they had to have a plan BEFORE we dove in. So, Christmas weekend, the girls measured their room and the furniture. They drew out the room on butcher paper, then cut out pieces for the furniture so they could move it all around. Finally, they came up with a solution. By early the next week, they had a plan.

And it worked!!! Amazingly enough, there was only one piece of furniture that accidentally wasn’t measured at its widest point, so we had to make a little tweak. But, other than that, it was perfect. And the result is pretty amazing.

First, the girls asked Doug to take the bifold doors off the closet. That made a much bigger difference than we expected space-wise! 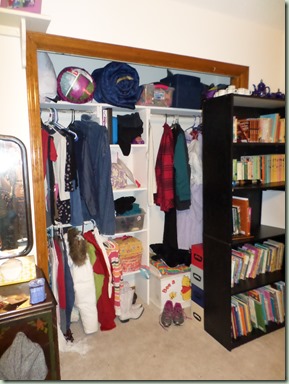 Then, we switched sides of the room for the girls, with Olivia’s bed 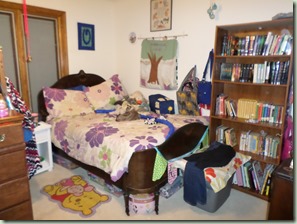 going where Angie’s had been (with one bookshelf remaining along that wall at the foot of her bed), Angie’s bed where Olivia’s dresser had been, and the other two bookshelves and Olivia’s dresser along the wall where Olivia’s headboard and vanity had rested. Angie’s dresser was moved to sit beside her bed, simply closing up her Angie cave entrance a bit (which doesn’t bother her at all!). 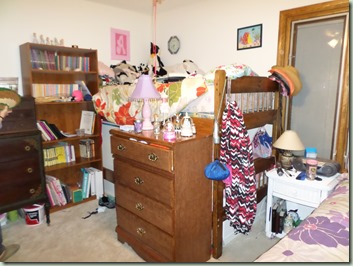 Olivia’s vanity replace Angie’s dresser between the door and closet. 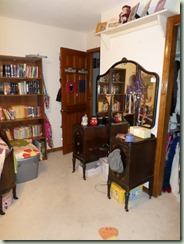 And, floor space!!! Look at that!!! Oh, and the accessible dresser and bookshelves. Hooray! 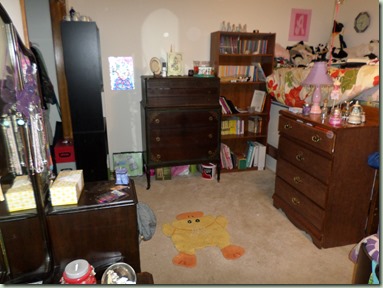 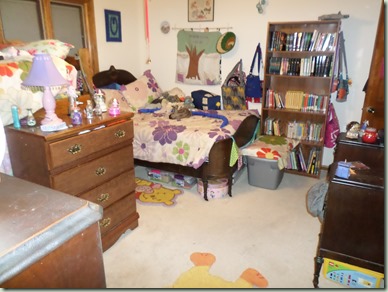 We all recognize that we still just have way too much STUFF, and we’re still working on that. But, once again, we are making this place more home. More ours.

Oh, and we now have a room that can much more easily receive guests because there’s actually space to move around! Yay! (Ready to come back, Julie?)

Herding Grasshoppers said…
Clever girls!!! They've "found" a lot of space :D So smart to take off the closet doors. (Not one of our bedroom closets has doors... still haven't installed any since remodeling, and I'm not missing them! I have hung a tension rod with a sheet/curtain in one room, though.) Good thinking to make the to-scale floor plan and furniture to see what works before you start actually moving things.

I was skimming quickly and looking at the photos and mis-read something! You said it close up Angie's cave entrance a bit, and somehow I read that as "Angie's bat cave" ;D

Don't know when we'll be back your way, but we sure appreciated your hospitality,

Choate Family said…
Yay! Looks like the hard work has paid off and you guys have discovered a great way to make the girls' room fit their personalities and still hold all of their things :-)
January 13, 2016 at 10:52 AM