Making it Ours: Living Room

For those of you who rarely move, let me share a little secret with you: It takes a little while to learn a house.

For us, the average is about six months. We move into a place and simply shove our belongings into the most logical spot – enough to get us functional. And, after our many moves, I think I’ve finally learned that I don’t really want that first spot to be the best spot. Why? Beecause there’s something about intentionally rearranging and reorganizing later that really seals the “home-ness” of a place.

Before Christmas, we tackled the living room. I don’t have a lot of before pictures, and these after pictures aren’t great. But, in all honesty, this is as much for me as for anything else. I like to look back and remember our different rearrangements and the thought processes that got us there. 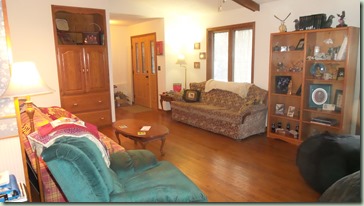 The bookshelf you see on the right above is really the only thing that stayed put. This side of the living room was a lot of wasted space before. That bookshelf, a cedar chest by the window, and big bookshelves where the couch on the left is now. We decided the couches would be better over there. 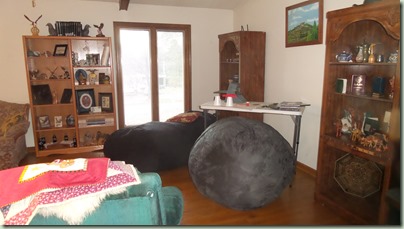 On this side, we had the recliner in front of the window, a couch against the wall on the right, and a couch in the middle of the floor, essentially ending where the recliner is now. We now have bean bags (the table is temporary – Doug and Steven had it out for a project), the big bookshelves against that wall, and a space between them waiting for the piano we are prayerfully seeking. The floor space is open, which opens up the dining room and allows us to get great use out of those bean bags!

This change also gave us a great spot for the Christmas tree – something we didn’t have before. It rested in front of the window and was beautifully visible from outside.

Our next project was the girls’ room, which we did the week after Christmas. But, that’s another post for another day!

Herding Grasshoppers said…
Oh! I can picture this, because I remember it before! But where is your TV?
Can't wait to see what the girls did with their room :D
Julie
January 6, 2016 at 3:58 PM