In the great outdoors...cold, but the ice from yesterday’s short bout of sleet seems to be gone. We discovered that our roads ice easily. And when temps stay at or below freezing all day, even the little bit of late sun does not thaw them. That’s a change for us, but back to what we’d expect. In Almyra, the wind and flat openness of the land would cause the ice to disappear from the roads even with the low temps and lack of sun. But, here the hills and trees prevent that from happening as quickly or easily.

Within our four walls...pushing a little early on the day so I can squeeze in a morning work meeting. Typically all work is in the afternoon, so it’s a bit of a juggle today.

A heart of thanksgiving...for the ability to keep on going with life even when it’s icy outside. Doug ended up working from home yesterday, but otherwise we were able to have a mostly normal Monday.

A heart of prayer...for a bit of umph and motivation around our house; for much deeper needs that are really not the kind you share in a quick blurb on a family blog.

Random observations...it’s amazing how quickly things become too sweet or rich and the stomach capacity seems to shrink when you cut way back on sugar. We haven’t cut it completely out, but we limited it highly immediately after Christmas. The first few days were SO hard. But, the impact has been much quicker than I remember it being in the past. I’m not nearly as hungry, fill up much more easily, and enjoy food more again. I know sugar messes me up – but, it’s just so stinkin’ addictive!!!

My silly children...are learning neat skills to enhance their creativity. It’s fun to watch. Steven is currently trying to create his own Lego catapult pattern – something different from the designs he’s made in the past from kits or by following instructions.

Thoughts from the kitchen...Doug got a cast iron abelskiver pan for his birthday. He has not yet had the chance to experiment with abelskivers, but a couple of mornings this week he has made our morning eggs in the pan. I should have gotten a picture – they were delightful! Nice balls of egg, perfectly filled with a bit of cheese and maybe a touch of bacon. Fun!

This morning, though, it was the good ole standby – bacon, egg, and cheese on toast. Oh, how that hit the spot. Yum!

Meanwhile, we’re continuing our soup month. Today is our second round of corn chowder. I asked the kids if they were tired of soup yet, and they responded with a pretty firm, “No!” Well, then. Encore in February? Oh wait…I guess we still have enough of January left to make sure they’re not tired of it before we revisit in February!

On my bookshelf...no clue, really. I’ve neglected reading. Need to get back to that. Although I think I got a review book notification in my inbox this morning.

Projects...I got my temperature blanket project caught up, so now it’s time to start working one day at a time. The center square needed six rows a day. Now I’m on one of the “logs” surrounding the center, and it requires four rows per day. I’m hoping that one turns out, because those rows might do better with more consistent color. We’ll see.

Otherwise, I have a sewing project to finish tonight, but I got my desk in mostly functional order on Saturday, so that makes it easier. The desk/sewing area/entire sunroom are still far from what they need to be, but we’ll get to that one of these days. We just ended up needing to focus on other things on Saturday, so this project got pushed back.

Finally, I have a Scripture memory project. I’d hoped to spend all of last year memorizing Philippians. Instead, I got about six or eight verses from the end of chapter one. But, I’m not giving up! My immediate goal is to finish chapter one by the end of January.

Sounds of the moment...a bird tweeting just outside my window. Or maybe it’s a bat? Unlikely, but I thought it was interesting to see this link pop up in my Facebook feed as I was hearing the bird. And, it sounds very similar to a couple of these.

From Hibbard Academy...Steven and Angie are in the final weeks of their cores (we’re on a strange schedule with the two of them, obviously). Steven’s finishing up the first half of US history while Angela is finishing her eastern hemisphere study. Olivia’s right at the halfway mark, which is a wonderful thing considering how much time we had to take off during the fall! Yay!

A favorite thing from last week...quiet family time on Friday.

The planner...normal stuff until Thursday when we go visit the Choates for what will probably be the last time before they start their journey back to the Solomon Islands next weekend. Then Friday night and Saturday, the fellas have the Cub Scout pinewood derby race.

Because visuals are fun...Angie got a knit farm animal pattern book for Christmas. She immediately started knitting this bull – to add to her herd, we assumed. And we were wrong! Friday morning, she wrapped this fella up and presented him to her daddy for his birthday. Of course, she knows it won’t stop Daddy from messing with her cows, but now he truly has one of his own. A pretty special one at that! 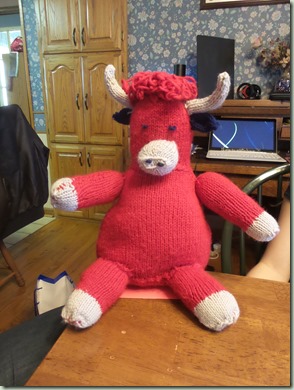 Herding Grasshoppers said…
HI Ann :D
I was thinking of you and soup month... sounds yummy! (Is your oven okay?) Ours seems to be working fine again - don't know what that's about, but glad of it!
Don't you love the flexibility of homeschooling? Slick roads? No problem! Want a different schedule? No problem!
And I'm so glad you get to go see the Choates again. Even though we don't get to see them in person, I'm missing them MORE already!
And you all as well, but it just feels different, knowing you're here in the states somehow.
*sigh*
Julie
January 19, 2016 at 11:49 AM