Skip to main content
Posted by The Hibbard Family January 11, 2016

In the great outdoors...partly cloudy and COLD! YAY! According to my phone it has warmed up to 24°. The ground was nice and crunchy when I went out to dump something this morning.

Within our four walls...quiet. Makes me wonder what the munchkins are up to.

And, at least here in my office, it’s a chilly 58°. I’ll be glad to go snuggle with the kiddos in the living room as we start school!

A heart of thanksgiving...for the cold (yes, I’m a bit nutty) and for central heating; for a menu plan; for children who can dive into a school week even if Mom’s not quite ready.

A heart of prayer...for friends and family in need of God’s hand in their lives in so many different ways.

Random observations...the electric controls on the oven went out again this morning. Then came back on about fifteen minutes later. Thankful that soup is on the menu for the rest of the month and that we’re not reliant on the oven!

My resilient children...are so great on Sundays! Sunday is super-packed for us, with very little downtime. Occasionally the kids express their preferences, but they do whatever we need them to do to make Sundays work.

Of course, when Monday mornings roll around, they need a little bit of time to recover. I feel that completely!! Doug and I usually don’t have that freedom on Mondays, but I’m so thankful to be able to offer it to the kids.

Thoughts from the kitchen...lentil soup today. It will be a first. I had it occasionally growing up (although, as I look at the plethora of recipe options, I have no idea what form of lentil soup I had!), but it’s been a while. Hopefully everyone likes it!

On my bookshelf...I have a novel on the night stand, and I’ll be reviewing a Philippians study on Joy of Writing this week. Other than that, I’m looking at my stack and wondering what to tackle next.

Projects...I have several in the works!

1. Finish the sunroom organization that never quite got done before school started back. I intended to do it a little at a time over the course of last week, but I never got those little bits of time. I’ll try again this week, but it will be done by the end of Saturday, for sure!

2. The reorganization will allow me to keep my sewing stuff out and handy constantly. That means I can work on sewing projects little by little without having to completely dismantle my work station to sew or dismantle the sewing progress to work. So, my project is to outline what projects I want to work on!

2. Finish the jacket I’m knitting for Steven’s Pooh Bear. I’m making it up as I got, so it’s not great. But, I can always make another one later.

3. This one is a year-long project. Doug found this online:

Essentially, it’s the colors to make what’s called a temperature blanket. Each day, you crochet a row to show what the high was for that day. By the end of the year, you have that afghan you’ve always wanted to make!

I’ve been wanting to make a scrap afghan for a while, and I thought this would be the perfect option. So, Angie and I both created our own color scheme based on colors we have on hand, and she decided to crochet while I planned to knit.

My first plan was to just do the straight rows (and that’s what Angie’s doing), which would look something like this: 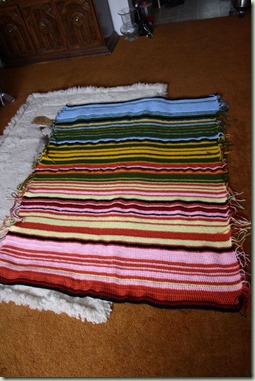 But then I decided to kill two birds with one stone on this project. This is actually the scrap afghan I’d wanted to make: 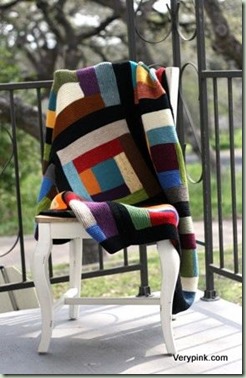 So, I’m using that pattern, but mine will be much less predictable in color. I counted out the number of rows and figured out how many rows per log or square I’d need to crochet each day. So, obviously, the blocks won’t be as clearly distinguished or patterned as they are here. But, this will be the layout. I’m curious to see how it turns out!

Sounds of the moment...music in the next room. And the washer. Otherwise silence. It’s about school time – wondering if I’ll have to wake them up to get started!

From Hibbard Academy...um…yep…well, I’m not quite sure. I haven’t reviewed the plan and made checklists yet! Fortunately, it’s easy to give the kids enough independent work (the next page in math, language arts, etc) to tide them over until I get checklists done. And, it’s our lower-key day anyway, so I have more time to pull it all together for the rest of the week.

In other news, though, the four-day week went very smoothly last week. Yay! Praying that continues.

A favorite thing from last week...having the opportunity to run errands as a family Friday morning without compromising the school schedule!

The planner...taking Steven to Scouts tonight; Doug has meetings several nights this week (fun, fun!), so that means we don’t have a lot of other stuff planned.

Because visuals are fun...on Saturday, the girls and I attended an AHG mother-daughter tea. It ended with a little fashion show. Olivia’s squad was supposed to emcee the show, but it ended up that Olivia was the only one able to attend the tea. So, she announced all of the girls, reading off their names, their outfits, and their reasons for choosing the outfits. And there were a LOT of girls! She made it, though, and did a fantastic job. 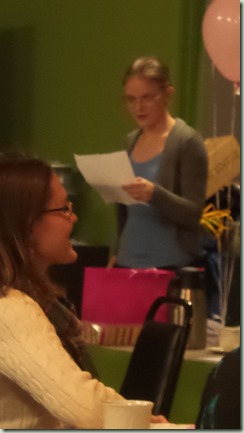 Angie, of course, broke the mold by wearing her antebellum dress! It’s about time for a new one. She outgrew her first beloved green and pink dress, claimed Olivia’s purple one, and now is about to outgrow that one. 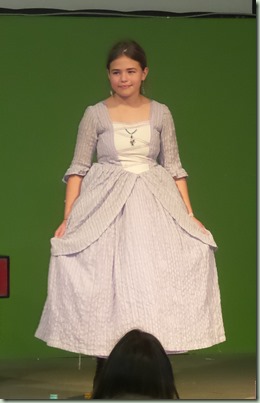 Herding Grasshoppers said…
Your temperature blanket idea look intriguing! I'm not sure how you're going to apply it to the color-block pattern you show, but what an interesting thing to do - assigning colors to each day!

The furnace is working valiantly this morning as we have cold weather too. Boys are still hoping for snow :D
January 11, 2016 at 9:06 AM