In the great outdoors...the sun is just rising, and the birds are having their early morning conversation. Crows, once again, are dominating.

Within our four walls...quiet. Olivia is having her quiet time in the living room. Angela is still upstairs – awake, I believe, but it usually takes her a little while to get “people ready” and come downstairs. Steven is at men’s breakfast with Doug. (Now, by the time I’m finishing up and getting ready to publish, everyone is done with chores and almost ready for school.)

A heart of thanksgiving...for small, but noticeable, reductions in humidity as August rolls into September; for the freedom to gather with other believers

A heart of prayer...health needs in our church ranging from colds to cancer; wisdom about how to make changes in our family life and schedule to allow us to develop some relationships more easily.

Random observations...I reach to update the little ceramic calendar on my desk and realize that I have to change to a new month block. A block that includes both of these months..

Yes, I know that’s mathematically obvious. But, it can be a little disorienting to see December when you’re still trying to figure out exactly what happened to June! It’s just been one of those summers.

My silly Steven...quote of the day: “I think I’m turning into a Cookie. I eat, I sleep, I drink, and I want my blankie.” (I wish I could get a picture of Cookie nuzzling his own blankie! It makes me laugh every time to see such a big dog acting like a child with a security blanket!) 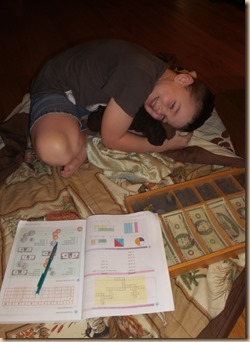 I’m proud of this sweet, snuggly, blankie-loving boy. He found out a couple of days ago that the man who typically prepares our church’s monthly men’s breakfast would not be able to cook this time around. Steven immediately cheered, knowing that meant Doug would be the one filling in – which meant he could go help his daddy! He knew without being told that it would mean getting up at 4:30 to get there in time to cook, but he didn’t care. He’s missed getting to cook men’s breakfast every month with his daddy, and he was so excited about the opportunity!

Thoughts from the kitchen...well, it’s Olivia’s day to cook, but I just realized that I didn’t actually PLAN anything for today! I got the whole month laid out…except for today. Ooops!

On my bookshelf...I’m almost done with Housewife Theologian and am considering what will be next for non-fiction. I have a stack on my shelf – it’s just a matter of choosing one.

For fiction, I am enjoying Tricia Goyer’s latest Amish novel, Sewn with Joy. Then I’ll go back and finish Sense and Sensibility.

Projects...oh, the usual. I want to get serious about contemplating Christmas gifts and actually get back to a few homemade things this year. There are several other things I’d like to sew, including helping Angie make her antebellum dress and pulling out some fun knit that will make a versatile, lightweight cardigan for me for the fall and winter. And writing. I’ve made two mornings in a row of writing (yesterday’s is on annhibbard.com). Can I turn that into three?

Sounds of the moment...the birds have quieted, but I hear distant traffic picking up as people head to work. It’s nice, though, because although we are very close to a fairly busy highway, we are in an older neighborhood surrounded by trees, so it still feels distant. Somewhere off in the neighborhood a dog is barking, but there’s no conversation this time around. Cookie only occasionally joins in the neighborhood canine discussions – primarily only when they’re all fussing about the tornado siren testing or when the neighbor dog behinds us wanders close to the old chain link fence separating our yards.

From Hibbard Academy...Olivia is loving church history, adjusting well to the mental shift from physical science to biology, and getting a solid foundation in geometry.

Angela has always been an independent worker, but she’s making the shift from elementary independence to middle school independence, preparing for the high school courses that will roll around before we know it! I don’t know that she’s taking in my new information in world history, science, or pre-algebra, but she’s gaining experience in managing her courses. She’s also experiencing her first year with Lightning Literature, a writing-based literature curriculum that we love.

Then there’s Steven. He gets most of my time these days, as he’s diving into upper elementary years. We are finishing the Civil War and had a rather sad day of reading yesterday as we read about a beloved character being injured in the war in one book and Abraham Lincoln’s assassination in another. But, at least we get to read it all together!

A favorite thing from last week...really, it was this week, but last week was super busy with revival services. We had no Sunday evening services, though, so we got to just enjoy a peaceful, obligation-free Sunday afternoon and evening. It was delightful!

The planner...Monday was a long work day, Tuesday had some rearranging to fit in monthly menu planning and grocery shopping, and yesterday was our weekly “spend the afternoon at church” day, followed by evening services. But, it looks like tonight will be nothing out of the ordinary – except making sure Steven finally gets his much-needed haircut! Oh, and the Hogs play their first game Saturday afternoon. We are excited about enjoying some football as a family.

Because visuals are fun...we’ve seen some beautiful moths this summer. First up was this almost white luna moth when the girls and I were at OBU for PraiseWorks. 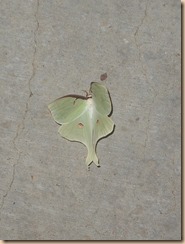 A couple of weeks later, we saw these ruby maple moths on the screen at the church office. 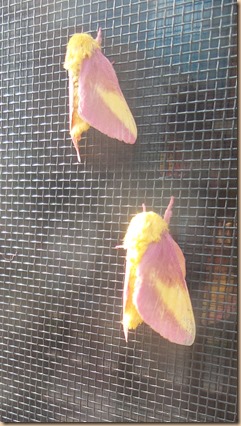 Not long after, we saw the ruby maple on our own back door along with this small-eyed sphinx 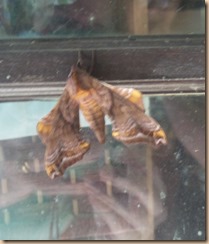 Finally, just yesterday, we found another luna moth – this one definitely bright green instead of the much lighter-colored one we saw in Arkadelphia – resting on one of the sunroom window screens. 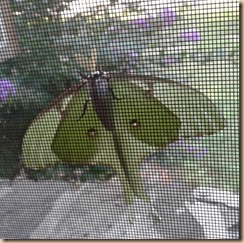 Our yard seems to really attract bright butterflies and moths, more than anywhere I’ve lived. The variety of God’s creation is truly breathtaking!

Herding Grasshoppers said…
You're scaring me, with your December calendar block! But I know, it's right around the corner. Compared to last year, we had a really short summer. I'm just not ready to gear up for fall, though I really do love this time of year! New beginnings :D
September 1, 2016 at 11:15 AM