We got rain! It started last night and rained into this morning. Oh it was lovely! Our gauge measured 1.6 inches, but I think it missed some of the early rain from last night. It all makes today’s grayness that much more tolerable. How I love rain!

It’s a bit of an odd week, but obviously also a bit more flexible, as I’m actually getting back to writing! Whew! The first couple of weeks of February were a little crazy.

God doesn’t teach us things in a vacuum. Often, a brother or sister is learning the same thing at the same time. For me, it’s sometimes someone else at church. But, more often than not it’s my precious friend Joanna. Even across thousands of miles – and sometimes even when we aren’t able to chat with one another – God so often works on us in similar ways. It’s such a precious thing!

Then, there is when it’s within my family. I love that the most. When God is working on Doug and me individually, but we don’t really realize it until we hit a certain point that ties it all together. Or when one of the kids comes with a question they’ve been mulling over for a while, and I am so excited to discuss it because I’ve been mulling over something similar. Or we all share the same insight from a Bible reading.

We were made for community, and God reminds us of that every time He teaches us something new!

“All relationships require effort. But how can we compare knowing the one and only God to any other relationship? It’s overwhelming. How are we even worthy to learn?

“And yet our great God has spoken. He has condescended to communicate to us, revealing his character in a covenant treaty.”

Parenting is tough. Praying for myself and several dear friends as we navigate and balance raising Christ-centered kids in the middle of this ugly, nasty world. Wow. The greatest joy is knowing that each of our children can personally connect with the Lord Jesus Christ. The grief is knowing that, at some point, they can each also choose to turn away from Him. There is not a perfect parent among us, and I’m sure all of our children could point to mistakes we have made or will make and blame us for their decisions. But, ultimately, we can only obey the Lord as best we know how each step of the way, learn from our mistakes, and continually entrust our precious, precious babies to Him. And pray. Oh so very much!

Watching answered prayers roll in and hearing my kids shout, “Yay!” when I share them.

Also thankful for the rain!

We went on a field trip last Friday. We asked each child to write something about the trip so I can post it on the blog (coming later this week or next week, as I have time). Their personalities have been so clearly revealed through their contributions! Angela sat down and spent all of Saturday morning typing up a 4+ page report of the trip!! Steven sat down and slowly churned out his five sentences. Olivia – my writer – still hasn’t written a thing. Why? Because it’s not school and it’s not her novel or her poems. Silly girl.

It’s so much fun to see their personalities come out through things like this!

Getting back the flow I had in January. And trying to write 10,000 words toward a novel this month, as well as the other writing I need to do. It’s an ongoing process of learning to let each day flow according to God’s design rather than my plan, yet still living within a diligent routine. And, I may or may not reach that 10,000 word goal. But I’m sure going to try!

Discussions during morning quiet times – that aren’t always so quiet because we’re discussing. (And Angie’s face because she couldn’t figure out why I was taking a picture of the discussion!) 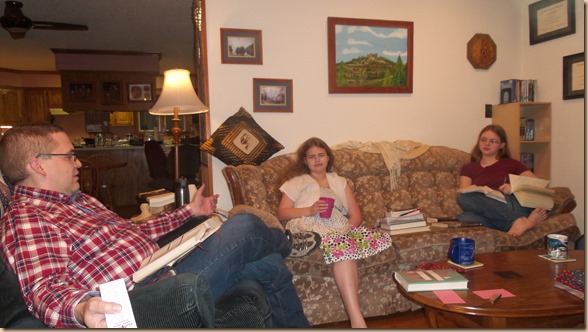 Oh, and this cute face. 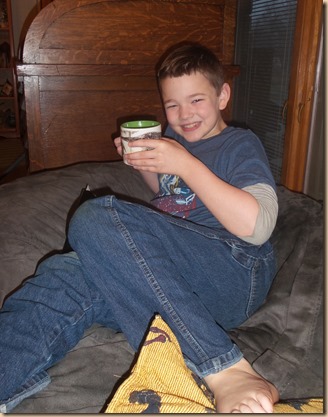 Let’s see…relative normalcy the first half of the week, but I leave Thursday morning to go work a homeschool convention with my boss. If you’re at the Texas GHC this weekend, stop by Well Planned Gal’s booth and say hi!

The girls get to go bowling Friday night and will be working a temp job Friday and Saturday. So, there’s no telling what mischief Doug and Steven will get into! Then, on Sunday night, we have a missions fundraiser meal after church. Looking forward to that, too. But, I think I’ll be crashing on Monday!

Herding Grasshoppers said…
Sure sounds like a busy weekend! But isn't it wonderful that your kids are at an age and a maturity level where you can have weekends like this one? And three cheers for being on target for finishing "on time" :D
February 21, 2017 at 12:31 PM

Choate Family said…
You are such a comforting friend - whether you are far away or close by. I'm looking forward to being close soon!
February 22, 2017 at 10:18 PM