We were awakened by a loud thunderstorm this morning. The best part about it? It was only fifteen minutes before the alarm went off! There’s just something about knowing that you still got a full night’s sleep, even if you were awakened a little early and unexpectedly.

It looks like the storminess is passing on now, but it’s still a bit gray and gloomy out there. And muggy. I’m beginning to think that if we have a winter, it will be in March!

Oh wait, is that a glimpse of sun peeking out? Maybe? Hopefully?

Otherwise, today is a relatively normal day. That’s nice. School, work, and processing through the other routines and rhythms of the day. All while being glared at by a cat. You know, normal stuff.

Most of our week is relatively normal. Or routine, rather. It’s also a week in which we are trying to get the rhythm of productivity and refreshment balanced back out again. We had it a couple of weeks ago, then kind of lost it for a week or two. So far, so good this week! (Yes, it’s only Tuesday, but getting through Monday is often half the battle!)

Habits are easier to keep when I practice them regularly. I know…revolutionary thoughts, right?! Sometimes, that’s what my brain needs – a reminder of the obvious. Okay, more than sometimes.

I also like it when, as I pray for others, God brings to mind ways I need to lift them up while also working on those same things in my own life. It’s not always fun, but it’s a great growing experience. And, it’s another evidence that prayer is not just about a prayer list; it’s about building a relationship with our Father and Creator. He uses those prayers to open our hearts to ways He wants to work in and through us.

A flexible schedule. That doesn’t mean some of it can be punted or tossed out the window. It still all has to be done. But the order in which we do it all can change and fluctuate, typically. That’s helpful.

As I think about being thankful for the flexibility of our schedule, I can’t help but realize just how good my kids are with that flexibility. The last few times a school morning has been interrupted, they’ve found nooks and crannies of time to fit school into, all of them finishing close their normal finishing time. They are learning to go with the flow without letting that flow derail everything. I wish I’d learned that as a child. I don’t learn things as quickly as an adult!

Nothing. Well, I’m getting writing into the mix, but not really working on anything out of the ordinary (since I’m trying to make writing much more routine). This weekend I’d really like to get around to starting a sewing project. It’s been far too long!

We don’t have “winteritis” like we frequently do this time of year. We seem to be plugging along very smoothly. Kids are focusing, and I am not in the “I’m tired of doing this!” mindset. I’m actually excited about pushing on and don’t feel exhausted when I think of planning a new year. That’s a huge blessing!

I might say that it’s partly because the weather is not cold, and that could be it. But, I actually love real winter. So, frequently when we don’t have one (like this year and last year), I’m more restless.

My kids praying for others, especially those in need of salvation. 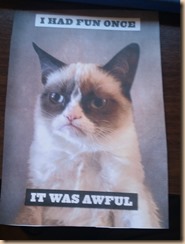 And this goofy monster. 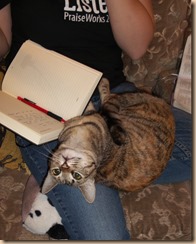 And this sassy face! 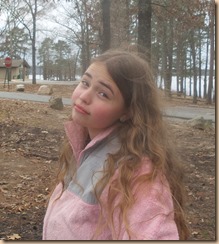 Let’s see…Doug has a meeting tonight; church tomorrow night; Friday morning I’ll have a writer’s conference for an annual writing project; Saturday is test day; Sunday we’ll have a farewell fellowship for our interim music minister.

Herding Grasshoppers said…
I love it as the kids mature that they can go with the flow - rearrange the schedule, whatever needs to happen. So much more peaceful for everyone!