As promised, here is our trip from Angie’s perspective, along with the rest of our pictures…

This Friday, our family went to the Mid-America Science Museum in Hot Springs, Arkansas.

We explored the exhibits, did the hands-on experiments, and refreshed our scientific knowledge.  We had a very enjoyable time learning and doing, as well as laughing and joking.

One of the first things we did was messing with sound. We walked into a room and touched colored panels on the wall to put together a drum track.  The walls transmitted the signal from where we touched to a speaker, where the signal was turned into sound. The sounds then went together to create a very cool drum track.

After the sound room, we walked over to a motion room.  Olivia and I filled a pendulum full of sand and released it over a stone block to create a bunch of parabolas that alternated into a rectangle. Daddy and Steven sat down at a machine that amplified your heartbeat so you could hear it. The machine also showed the signals going through the machine as colors. Mommy and I joined them after the pendulum finished swinging. Olivia and Daddy put together a motion video called Attack of the Killer Hedgehog. Olivia had my hedgehog in her purse, so they put it on a table with a camera screen and moved it a little bit, then snapped a picture. The hedgehog slowly bumped into three snowmen that were there for movie purposes. Olivia and Daddy took twenty pictures and made a one second movie. The hedgehog zoomed through the snowmen and out of sight. Mommy and Steven cranked a wheel and spun a rope into an oval. I turned a wheel and created waves in a tower of bars. As they twisted and turned, the movement went all the way up the tower even as the lower bars went the other way.

Next, we built paper airplanes in a long hall. 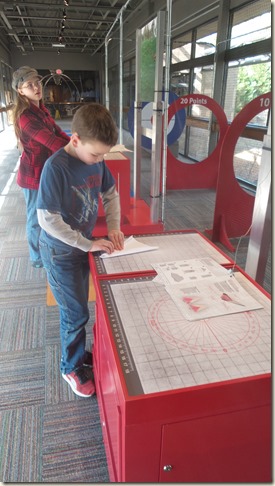 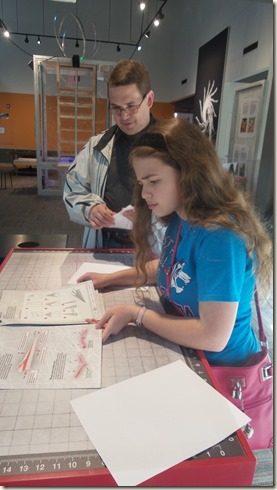 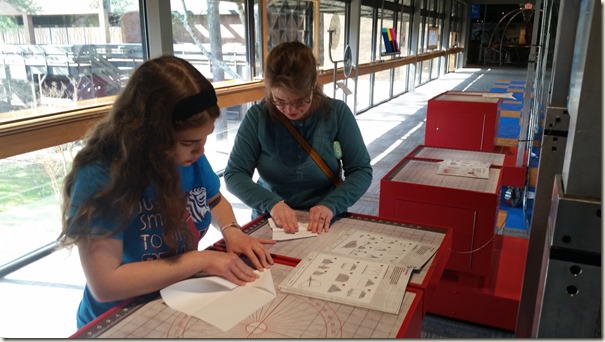 There were three rings set up with a target at the back, and various cabinets with paper, instructions, and angle measurements to build on. Steven built a paper airplane that went all the way through the rings before it crashed. 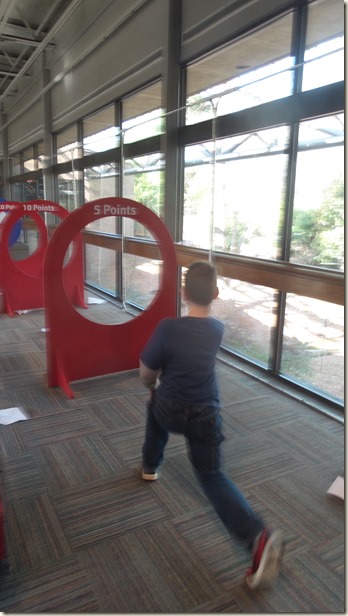 Mine went up and looped.  It didn’t really get anywhere. 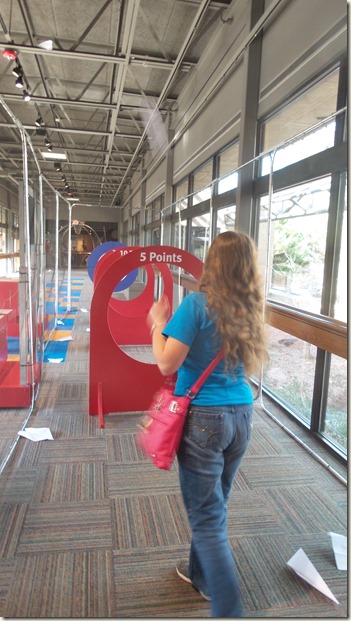 On the walls of the hall, there were glass light twisters.  The first one was a set of plain glass with a pattern like stained glass would normally have. When we looked through another glass, though, it wasn’t normal glass! The part of the window that was covered by the circle showed colorful glass. Next, there were colored pieces of plastic that you had to line up just right to cancel out all the color. Then there was a window with sets of blocks in it that, as you walked by, showed the outside in lots of little squares. That one was slightly disorienting. Steven played with a camera that you could spin back and look at the changing shadows and seasons.

At the end of the hall was a large contraption that used air pressure to launch balls down into a fountain on the lower floor.  We armed it, used a lever to pump until the PSI bar was green, and let the ball fly by holding down a button. The ball went up and into a spiral that dropped it straight into a tornado of water contained in a glass tube. The ball went down the tornado and out into the pool of water underneath.

We went down a ramp into a small room.  In the room was a maze with a mirror reflecting it, a door, and a square hole in the wall. I traced my finger along the maze itself. That was the easy part. Then I looked at the mirror image and tried to trace my finger along the actual maze while looking at the mirror image. It was hard! I knew that you had to do the opposite of what was in the mirror, but it was still hard. 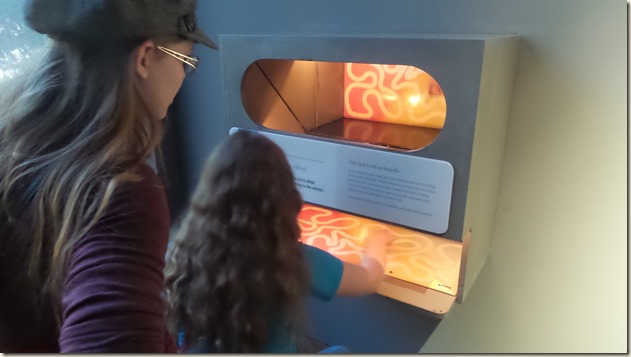 The hole in the wall contained a spring.  It was right behind the entrance to the hole, so easy to find, right? Wrong! The spring was actually under the platform it looked like it was standing on, but there were mirrors set up to make it look like the spring was easy to reach.

The door was another room with light sensitive walls. At the end of a thirty second countdown, a bright light would flash, making it look like there was a picture of our shadows on the wall. We did some really crazy poses when the light flashed.

After light, we went into a soil/underground room. Olivia, Steven, and I crawled through a group of tunnels that showed the basic underground rocks. We climbed over rope bridges and went down slides. We even went through one room with an ultraviolet light. Everything was glowing.  In front of the tunnel system was a Sauropod dinosaur footprint.  It was a large dinosaur. There was also a large quartz crystal formation on display. The quartz is the official mineral of Arkansas. There were different colors on the crystal, showing where other minerals had gotten in the formation. There were even some clear spots, were the crystal was completely pure. There was also a cast of a mastodon skeleton.

We also looked at a terrain map of Arkansas, its minerals, and its main soil types. Going up into the northwest part of the state especially, there are a lot of variety and mineral types. Along the eastern border, it is mainly the same terrain. This is because of the Mississippi River.  One of the main soils is called Stuttgart soil.  It is very good for growing rice. This was especially exciting for us because we used to live around Stuttgart.  Almyra was on the terrain map. 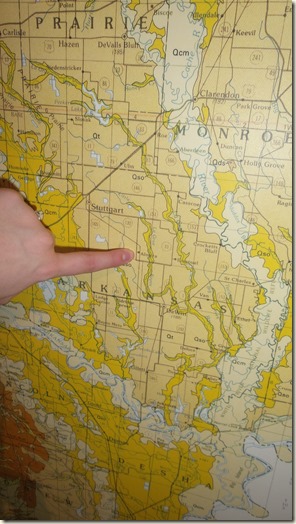 One of the hands-on activities was a big wooden box filled with clay pebbles. A projector showed rivers and mountains wherever we built them or hollowed them out.  I built a really big mountain.  Mommy made a dam and lake. Daddy made it rain. After we built rivers, ponds, lakes, mountains, and whatever else we could think of, we smoothed everything out really flat and made Arkansas County. Olivia built a reservoir and rice fields. 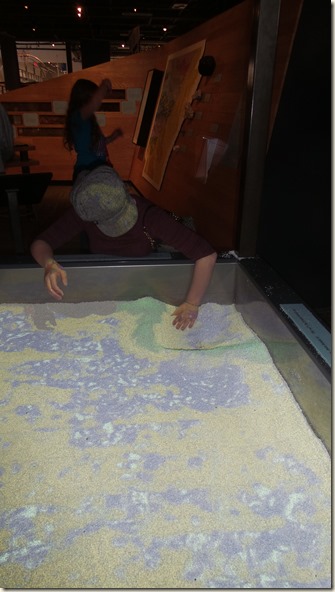 All the way downstairs was electricity and connection.  Olivia, Steven, and I played with the heat sensors. Olivia’s glasses looked weird compared to the rest of her face. 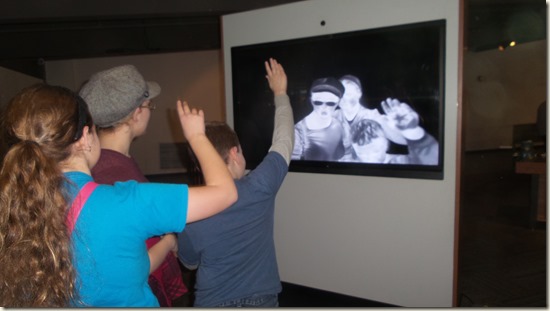 We experimented with creating electricity and Olivia put together gears to spin a fan. Then we learned about gyroids. Gyroids were originally thought to only be man-made, but scientists have found them in tiny places like butterfly wings. They are connected cell structures, but they twist so nothing can go from one structure to another.

Next we went to dinosaurs. There were three different types of dinosaur footprints in the concrete outside. I did not write them down, so I won’t try to spell them, the dinosaur names all started with C and the tracks were small, medium, and large.  Olivia, Steven, and I followed the footprints into a large area with a concrete cast of a dinosaur in it.  There were tools and brushes, and we brushed pieces of clay aside and uncovered a dinosaur! Then we covered him back up so other people could play. 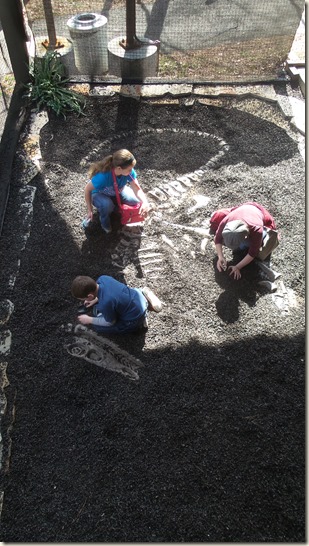 The last things we did were also outside. First we created a kind of circuit by two of us sitting on a bench with our arms on armrests and everybody holding hands. This closed a circuit and played music. We then went to an area with rope bridges and a large circular rope hammock. We climbed all over the hammock and I went over one of the rope bridges backwards. It was fun. 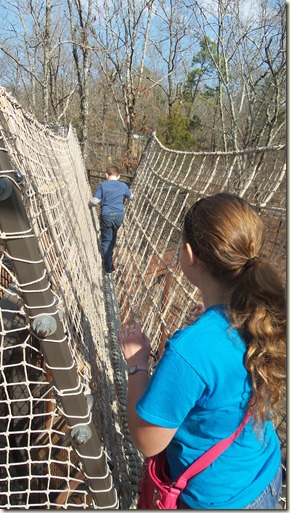 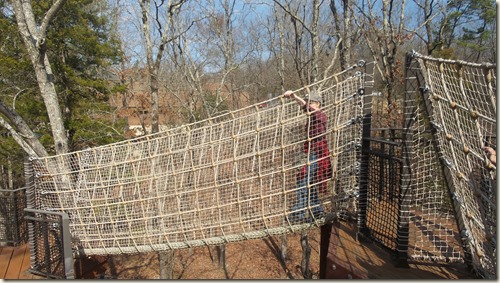 Then Olivia and I laid down in the hammock and read. 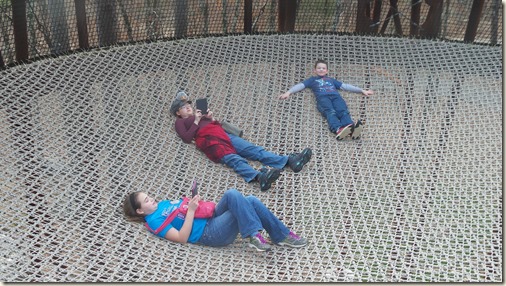 All in all, we had a very good trip.