Twenty years ago today, I was in my dorm room enduring a muggy, stormy Saturday. Campus was almost deserted because so many people were gone that weekend. That turned out to be a huge blessing. I was watching the weather on TV when I heard, “A tornado has touched down in Arkadelphia,” as sirens began to wail. Those words were barely out of the weatherman’s mouth before power went out and the roaring began. I raced for the stair well, but the roar was gone almost before I made it to the stairs. I discovered later that the storm had, in fact, touched down on OBU’s practice fields. It jumped up and flew over campus before slamming back down into downtown, pretty much flattening a mile-wide path through town. Within minutes, the sky was blue and the air was still as the storm continued on its destructive path elsewhere. So very many memories are connected to that storm. Some of them are terrible, but others are so beautiful – memories of watching a town come together and of being a part of helping Arkadelphia clean up and rebuild. Those memories are especially strong when March 1 is stormy as it was again this morning.

It’s been a crazy, fast week. We’re all finally feeling rested again after a weekend of Doug and the kids running here and there while I joined my boss for a really wonderful weekend working the Ft. Worth Great Homeschool Convention. Despite my boss being sick and me doing crazy things like leaving my overnight bag under a table at the convention hall, we really did have a great trip. The reduced sleep and heavy peopling have taken a bit of recovery time, though!

“Be sweet to homeschoolers – They don’t get out much.”

Yep, that’s about as deep as it gets this week. (And, yes, I saw some of those homeschoolers last weekend! Haha! We’re a strange bunch sometimes!)

I have friends waiting. Friends praying for wisdom. Friends being challenged on every side. Friends seeing new doors opening. Friends trying to figure out which direction they are supposed to go. But through it all, God is so incredibly faithful! It often hurts when we’re in the middle of it, but oh how faithful He is!

The cool air wafting through my window. It was warm and muggy yesterday and this morning. But, the last bout of rain and storminess pushed through, and immediately the air turned fresh.

I’m thankful, too, for friendships and for reminders of God’s hand.

Okay, so everyone who knows our family knows we’re major bibliophiles. Among other books and series, my kids love the Lord of the Rings series as well as The Hobbit. They have never seen more than a few clips of the movies, though. There’s a good reason for that. Over the weekend, Angie caught glimpses of portions of Hollywood’s rendition of The Hobbit as it aired on television multiple times. I got several texts from Doug describing her responses. While out grabbing a quick supper after bowling Friday night, they finally had to leave the restaurant because the “critique” of the movie was getting a little intense. After they were home and the kids were in bed, Doug asked Angie if she wanted to get up and come quickly so she wouldn’t miss the scene where Legolas and Thorin fight the pale goblins on the frozen lake. Her response? “Wait. What?! When does that ever happen?”

It has been determined that Angela never wants to watch any of the movies based on Tolkien books. Or Janette Oke books. Or at least a couple of the Narnia movies.

Getting my writing routine back in line. Pondering Olivia’s birthday. If the months keep flying this quickly, it will be here before I have time to even begin to contemplate it!

A light couple of weeks. Thankful for the leeway we have in the overall schedule, because it’s giving us a change to be flexible in a stretch where our normal times of rest are not at all possible.

Cow goofiness. I’m not sure how the insurance company will respond to putting a cow driver on our plan, though. 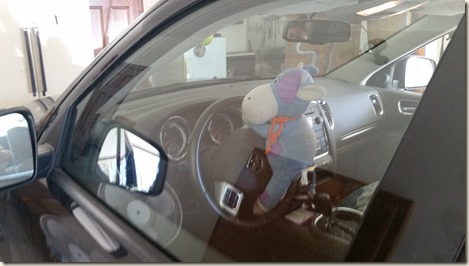 Dentist appointments tomorrow. Doug is speaking at a men’s retreat on Friday (not staying for the whole retreat – just for a while on Friday). Hopefully some real rest and family time on Saturday since we’ll be missing that on Friday.

Herding Grasshoppers said…
Oh Ann, you were in that storm? The boys, Tate in particular, went through a time of being fascinated with tornadoes, and I'm pretty sure we've seen video from that one. Could be others - I think there were about 30 on that same day!