Well, now a week and a half after the fact I'm finally posting about our trip to the Arkansas Post Museum! The museum is in Gillette, AR, which is just under an hour away from Monticello. Although it's not on the exact site, it commemorates the general location of the first settlement west of the MS. Hernando DeSoto began that settlement, and although it didn't last, other settlements followed in the same area. Revolutionary and Civil War battles were also fought in the area! Another time we hope to go back and explore more of the sites commemorated near the museum grounds. That day, though, we went with the intention of attending a special event - someone was going to come do a display of 19th century women's clothing from the late 19th century. The girls would have loved that! But, when we arrived, we discovered that the event had been canceled at the last minute.

Of course, that didn't even come close to ruining our trip! We were told to feel free to tour the grounds and look into the buildings. None of the buildings were original to that site, but they were all so fascinating!

First stop was the kitchen. 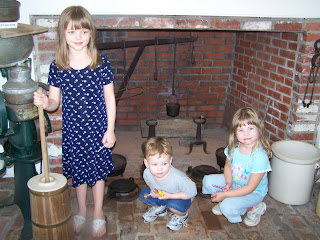 
Next we walked into a building housing all sorts of neat artifacts from all phases of history. There were war memorials from both World Wars, the Korean War, and the Vietnam War. There was a section of the room roped off and set up like an old dry goods store, complete with mailboxes, bins and shelves, and all sorts of samples of what the dry goods store might carry. There were pieces of farm equipment lining a wall. There was a gorgeous old sewing machine. There was a section set up like an old parlor. Such fascinating sights!

The girls were excited to see a real farm wagon and see how it could be converted to a covered wagon. 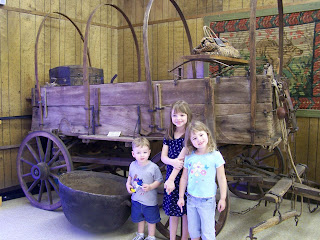 They also enjoyed looking at some treasures from various old schoolhouses, including seeing how the desks were made. It now made sense why the youngest class sat on the front row and held their books in their laps without a desk! 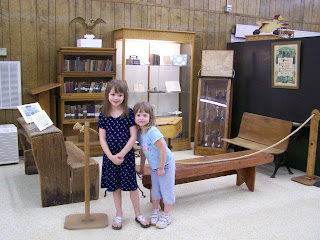 The largest attraction in the building was a fascinating child's playhouse! Built for a real child, the playhouse contained a living room, bedroom, and kitchen, all with child-sized furniture. It even had a screened-in back porch! All of this once belonged to a child from the area - her parents had built the house for her and made all of the furnishings. It was quite amazing! 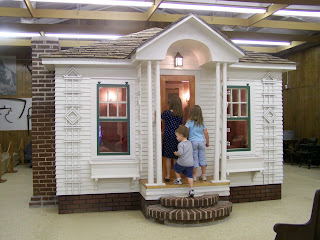 Our last stop on the grounds was a log cabin. This cabin is 130 years old and has been moved four times. Some of the flooring is being restored, but much of the cabin is the same as it was when it was built (with the addition of some electrical outlets for events!). It was amazing to us how nice and comfortable it was inside the cabin, even on a warm day! 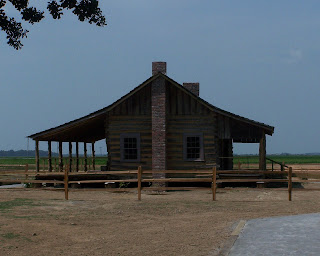 Driving home, the kids enjoyed some of the best lollipops we've ever tasted! I'm not a big lollipop or sucker fan, but those were phenomenal! If you're ever by there - and you like caramel - there caramel lollipop is a must!

Stephanie Kay said…
I have vague memories of visiting the museum when I was kid. Very vague. I loved going to stuff like that! Probably why I majored in history and drag my kids to museums. On our vacation we visited 2 museums, 1 wildlife reserve and NO amusement parks. :)
July 22, 2009 at 2:53 PM

The Hibbard Family said…
Amusement parks? Ick! :-) Museums and historical sites are the ONLY way to go! The awesome thing is that my kids agree!
July 22, 2009 at 3:04 PM

Doug Hibbard said…
Minor addition. While there was a Civil War battle fought in the area, there was also a Revolutionary War battle as well. Which I found pretty cool.

The Hibbard Family said…
Thanks, sweetie - I meant to put Revolutionary War and had a brain lapse! I'm going to go back and put that in.

Ruthanne said…
The playhouse is a new addition - they didn't have that when we went a few years ago. :( Bummer!