There were so very many things we would have loved to see while we were in the Louisville area. We could have spent the whole week simply touring the sights! We're hoping that someday we can head back that direction for a real vacation - maybe in a few years.

We ended up not going to the Creation Museum when we discovered that it was an hour and a half drive from Louisville. That was just a bit much considering how much we were going to be on the road as it was. But, we did make it to the Louisville Slugger Factory! We grabbed a snack and headed over there after leaving the convention late Wednesday morning.

In front of the factory is an enormous replica of Babe Ruth's bat! 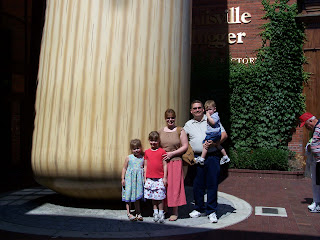 Inside we had the chance to tour the factory to see how they made the bats. We also were able to browse the museum. And, because we were there while the corporate employees were out to lunch, we were able to take advantage of the noon tour through the offices where we were shown a fascinating collection of baseball art.

Everyone got a mini bat as we left the factory tour. 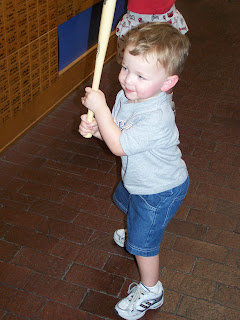 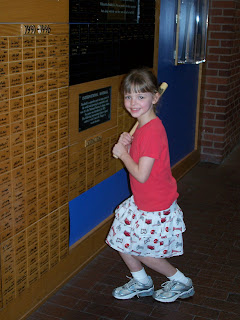 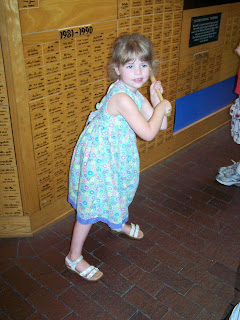 And, we found a giant glove for the kids to play in after watching Doug take a shot at hitting in the batting cages. 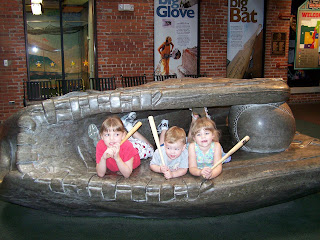 The factory was definitely a fun attraction to choose while in Louisville!

Of course, from there we headed to Shah's Mongolian Barbeque which could, on its own, draw me back to Louisville! Talk about good food!
Email Post
Labels: Outtings and Trips

Stephanie Kay said…
Sorry you didn't make it to the Creation Museum. We were in Louisville for a graduation a few weeks before it opened so we haven't been either. Everyone I know who HAS been would have told you it was worth the drive. Our next trip South we plan to swing through there (though it will be a little out of the way) so we can see the Museum.
July 1, 2009 at 12:35 PM