Okay, so my northern friends will probably laugh at this, but "cold" weather (relatively speaking) actually hit southeast AR this week.  When temps don't get out of the 40's two days in a row, a cold front has definitely  moved through.  I will confess that I would prefer the cold of northwest AR since they got some snow flurries this morning, but I'll take what I can get!

Yesterday it was a wet cold, with rain and t-storms throughout the day.  But today it has been a beautiful sunshiny cold.  I love it!

We've had a good week so far.  My friend Paula came down to visit for a few days.  In addition to chatting with me and playing with the kids, she braved the wild worlds of cross-stitching and helped me with a few Christmas gifts.  I knew I wanted to finish off the gifts somehow, and she jumped in with the perfect thing!  It was quite the sight yesterday afternoon as Paula and I worked on the cross-stitching and the girls pulled out their plastic canvas crafts.  Poor Steven felt a bit left out as he sat piddling with a board game on the floor.  He needed some power tools!!

And, while I'm being random, I just had to share an adorable picture with you. 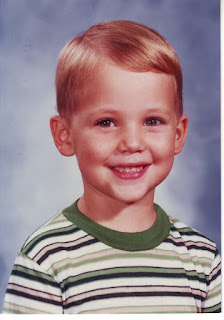 Isn't he cute?  That sweet little grin and those precious eyes.  I just love it!

I look at pictures like this and I realize I have a special treat in life.  Steven's looks and personality are so much like a carbon copy of Doug that it's almost as if I get a chance to glimpse my handsome prince's childhood.  And, I get to glimpse into Steven's future.  I can show you just about what he'll look like five years from now, ten years from now, and as a young father.  And, if the pictures are any indication, I can show you what both Doug and Steven will look like when they're grandpas, too, considering how much Doug looks like his dad in some of these old pictures.

Genetics are an awesome thing, aren't they?

And my two men are so incredibly handsome.