Last fall I shared about our radish growing experiment, both the disappointments and the excitements.  Sonlight taps in to the TOPS science program to do multi-week science projects starting with Core 3.  At first I was skeptical.  I wasn't sure that I would really like being tied to making sure we did our project assignments every day, five days a week, for four to five weeks.  We tend to be a little more flexible than that in our typical school year.  Then, when the radishes didn't sprout on schedule, I was nervous about how successful the whole project was going to be.  But, in the end, it was a delightful success, and all three kids are still talking about growing radishes!

Now it's time for our second project.  This time we're growing corn and beans.  It's been a lot of fun to watch how the girls have matured between projects, and how much more of this one they're able to do themselves.  And they are having a great time!!

Yesterday we finished our third week of the project.  The first week was spent making our equipment for the whole project.  One of my favorite pieces of equipment is the balance.  Using a variety of everyday household items, we were able to make this balance to help us determine the mass of our seeds.  On one side of the balance is a little cup made out of foil hanging from a paper clip into which the seeds can be dropped.  On the other side is a flat piece of foil clipped inside a paper clip which serves as a counterweight to the foil cup.  We slip labeled paper masses into the paper clip with the flat piece of soil until the balance stabilizes, thus determining the mass of each seed placed in the foil cup.  We have had so much fun measuring our seeds! 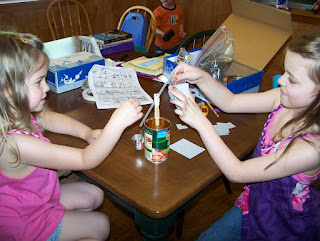 Another piece of equipment was the pole planter.  Using lined paper, we created a tube or pole that we attached to the side of a cup.  Essentially, we created a system to make it easy to measure the growth of a bean sprout and a corn sprout (more on that later!). 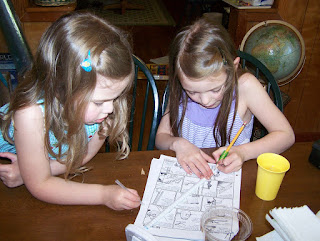 Finally, we made a planter box - well, we made stage one of the planter box.  This box has gone through a good bit of alteration through the course of weeks two and three, but we'll share more about that later.  Essentially, the planter box is an orange juice carton set up initially to be a self-irrigating greenhouse and then later conformed to an open planter box in which the seeds can grow in vermiculite. 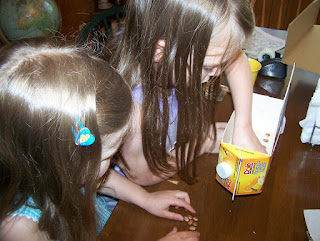 We placed 18 bean seeds and 9 corn seeds into our planter box on the first Friday of our project.  And thus began the delightful task of growing our corn and beans!  (Here they are after a few days in the box.) 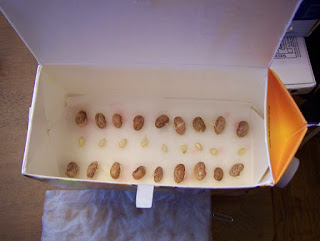 Here's all our equipment, ready to go (including a sealed container for later seed experimentation)... 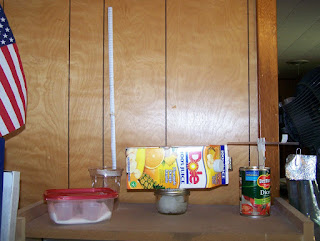 By the way, since I regularly do book reviews, please know that TOPS Science did not solicit this review.  We bought these books as part of our science curriculum for this year.  But, if you're looking for a fun, hands-on approach to science, I would definitely have to recommend TOPS for consideration.  We are so excited to have two more projects to work through in Core 4!
Email Post
Labels: Activities and Creations Hibbard Elementary

Maybe we'll have to grow some inside plants. Those *^%#& deer eat just about everything I plant outside. Had two in the yard just this morning. AACK!

The Hibbard Family said…
Our friends who live in the outlying areas have that problem. Although, recently we saw three deer dashing through the middle of town! Right down our street!!!

Luke Holzmann said…
Seeing your pictures brings back memories of shooting that Discover & Do with my wife...

Glad to hear things are going so well!