I had every intention of posting several blog posts last week, but I decided instead to just enjoy my family.  It was worth it!  So, now I’m playing catch-up.  I’ll start with our pumpkin harvesting.

Just out of curiosity, do people not make anything out of fresh pumpkin after Halloween?  We didn’t get one before Halloween because we don’t usually carve pumpkins.  And, our schedule was going to be pretty hectic in the days surrounding the end of October/beginning of November.  So we waited.  Then we almost were out of luck!  Fortunately, Doug found some when he had to go to Little Rock for a Hebrew test.  He bought four perfect little pie pumpkins and we dug into them the Saturday before Thanksgiving. 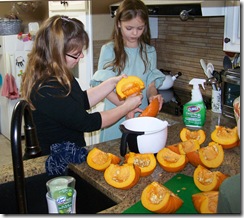 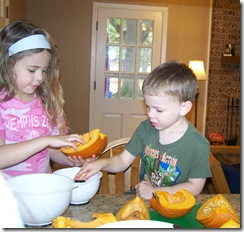 We pulled out the seeds, cleaned out the pulp, put the pumpkin in pans of water, and baked it all until the peel separated easily from the fruit.  Angie decided to get a picture of the bountiful harvest!  We got six cans worth of fruit and a bag of seeds from those four 99 cent pumpkins.  I think it was worth the effort! 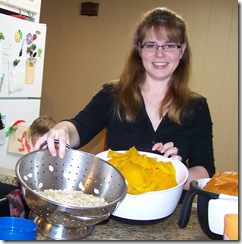 Meanwhile, the kids were ready for their favorite fall treat – pumpkin bread.  But, we had some ripe bananas that really needed to be used up, and the whole process of harvesting the pumpkin was just going to take a while.  So, we decided to go with banana bread instead! 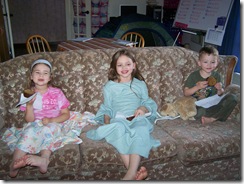 I’m sure a loaf of pumpkin bread is in our near future (although trying the pumpkin cheesecake brownie recipe I found a few weeks ago just might end up taking precedence!).