In the great outdoors...right now it’s just dreary and cloudy (no storms this week, though!), but I’d rather think about this morning. As the sun was coming up and the clouds were beginning to roll in, I looked out and saw  deep blue contrasted against dark gray with the sunlight not only enhancing the colors but also bathing the ground in light even though the sky in my line of vision was mostly dark. It was breathtakingly beautiful!

Within our four walls...a bit of restlessness today. And a lot of goofiness.

A heart of thanksgiving...for no more philosophy!!!! Doug had a killer philosophy of religion course this past term with enough work to fill a full year instead of an eight-week term. So thankful he’s done! He still has one term of Greek left and then we can celebrate that being done too. YAY! Making progress…

I’m also thankful for a chance to visit with extended family yesterday – my parents, my brother Ben and his wife Ashley, and my nieces Abigail and Nora. I took only one picture, and that one wasn’t great. But, I hold in my mind the picture of my hubby holding sweet little Nora (now 2 1/2 months old). She typically does not like men, oddly enough, but she did not fuss for Doug!

A heart of prayer...for Preston, the baby I’ve mentioned the past two weeks. His lungs are awful right now. They tried changing ventilators, but that did not work. They need to move on to steroids, but the steroid treatment has horrible side effects. Fighting for the lungs leaves them little opportunity to deal with his primary issue, the fluid on his brain. His other organs still look great right now, but the longer his lungs struggle, the more strain that will put on his other organs. But, God is working through it all, and we are trusting that He will reach some hearts that do not yet belong to Him. That’s the miracle we want to see most of all!

Random observations…I was reminded last week just how poorly my body reacts when I don’t feed it enough red meat. I’m not one of those people who can survive on vegetables or even white meat. In other news, a juicy burger, nice big steak, or plate full of brisket sounds really yummy right now.

My silly children...Earlier Steven was singing a made-up tune, in a rather cheerful voice; something like, “The fairies must be found before it’s too late!” He never did let us know what would happen if they were found too late.

Meanwhile, they are currently taking turns playing on the Wii. For open-ended games, they have a 20 minute time limit and a light-up timer to mark their time. The timer usually sits beside the tv, easily visible. Today it was in the kitchen. On the microwave. Out of sight. Yeah.

On my bookshelf...lots of books still waiting. I didn’t get the “fun” book read last week. But, that’s okay.

Projects...I finally started on a “real” knitting project…a very small doll blanket for the girls, knitted with variegated thread (bold pinks and purples with a hint of blue as well). It’s about half done. I let them choose the pattern, and they wanted it to be ribbed. I love the look and the feel of it. I think some warm socks out of that pattern would be so comfy.

Sounds of the moment...the kids jabbering as they play Lego Star Wars on the Wii.

A favorite thing from last week...the chance to truly take Saturday off for the first time in a while. It felt very, very good.

The planner...three days of school, meeting in Little Rock on Thursday with the ministers’ wives planning team (we have fun, even when it’s work!), then no school on Friday because I don’t want to teach on my birthday. We’ll probably paint the Lego tables my parents made for the kids and start sorting spring clothes.

Because visuals are fun...Doug and our friend Rachel from church have a “coffee battle” going on. It cracks me up! Rachel fills a huge mug at least half full of milk and sugar before adding some coffee, making her coffee is a very, very pale brown. Doug enjoys creamer, but he also likes his coffee black. So, they are constantly exchanging pictures informing each other how coffee should look. Here’s what Doug sent yesterday morning. Nice and strong. 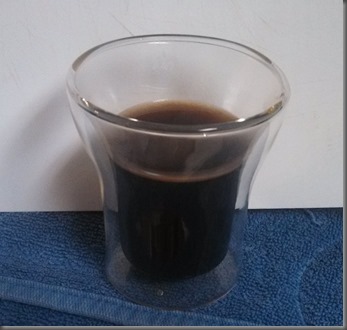 I like this cup from today, though. He added creamer, and it all sank to the bottom. There were three or four levels of color. It was really pretty! (Rachel’s darkest coffee is the color of the bottom layer, but it’s usually lighter than that.) 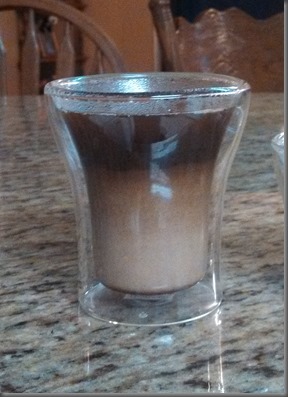 Pass on BIG congratulations to Doug on the Phil. class. I bet he's glad it's DONE. And just one more term and he'll have... (I forget what he's earning)?

So glad you got to see your family - a baby niece!

And, OH!, I am so with you about the red meat. Looking forward to grilling season.

What are your birthday plans?

The Hibbard Family said…
He actually has more than one term left - it's just that he only has one term of Greek left! Then he'll have his MDiv. It's just that after philosophy and Greek, nothing else seems quite as tough!!